A Palestinian has stabbed and wounded two Israeli police officers who subsequently shot and wounded him. Following a period of relative calm, Jerusalem was the scene of several similar attacks at the weekend. 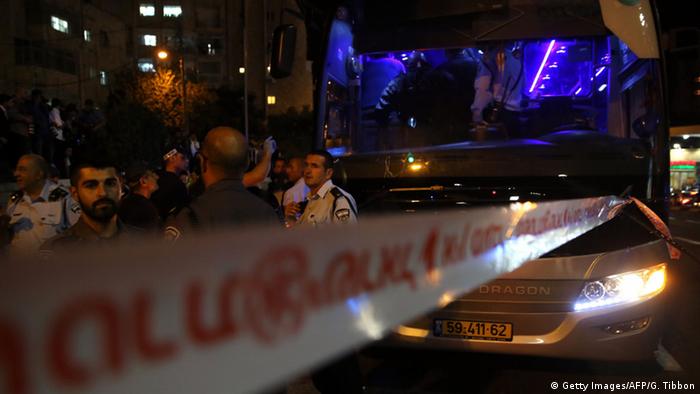 Washington has urged Israel to stop settlement construction in occupied territories, saying it undermines peace. More than 150 units illegally built in the 1980s have been retroactively approved by a military committee. (31.08.2016)

After attack on Israelis, Palestinian doctor stops to help

At a time of hostility, a Palestinian doctor stopped to help Israeli shooting victims in the West Bank and opened a window of understanding. Daniella Cheslow reports from the West Bank. (07.07.2016)

Israeli troops have clashed with protesters while destroying the family homes of two Palestinians in Qalandiya refugee camp. During the demolition, the soldiers opened fire and wounded four Palestinian youths. (04.07.2016)

Israeli police spokeswoman Luba Samri said a female police officer was stabbed in the neck and badly wounded while a male officer was moderately injured. Officers shot at the assailant and critically wounded him, she said.

The attack was outside the Herod's Gate entrance to the Old City and follows a spike in violence over the weekend. Four Palestinians, one of whom held Jordanian citizenship, were shot dead in recent days over alleged assaults on Israelis, according to Israeli authorities.

A Palestinian stabbed an Israeli army officer in the chest on Sunday outside a West Bank settlement before soldiers shot and wounded the attacker.

Some 227 Palestinians, 34 Israelis, two Americans, one Jordanian, one Eritrean and a Sudanese have been killed in violence since October, according to a count by the AFP news agency.

Israeli forces say most of the Palestinians killed were carrying out knife, gun or car-ramming attacks. But others were shot dead during demonstrations against Israel's occupation of the Palestinian territories.

Israel blames the deadly violence on incitement by Palestinian political and religious leaders. But Palestinian leaders argue the violence is rooted in nearly 50 years of military occupation by Israel and dwindling hopes for an independent Palestinian state.