Prime Minister Imran Khan told parliament he had "no doubt" that India was behind a deadly attack on the stock exchange building in Karachi. Four gunmen attacked the building with grenades and left several dead. 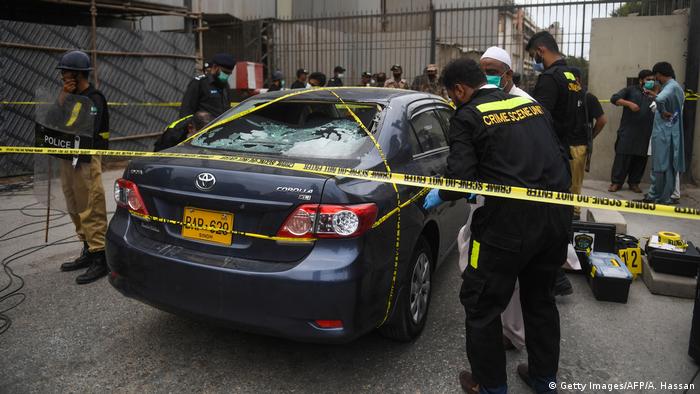 Pakistani Prime Minister Imran Khan told parliament on Tuesday that he believed India was behind Monday's deadly attack on the stock exchange building in Karachi.

"There is no doubt that India is behind the attack," Khan said. "For the last two months my Cabinet knew [that there would be an attack]. I had informed my minister. All our agencies were on high alert."

India has denied any involvement in the attack.

Four gunmen attacked the Pakistan Stock Exchange building on Monday, killing at least three people including two guards and one policeman, while the four assailants were also killed by gunfire.

The attackers pulled up in a car outside the trading floor and hurled a grenade at the building before opening fire, according to police.

The Majid Brigade of the Balochistan Liberation Army (BLA) later took responsibility for the attack. The BLA is an armed insurgent group that advocates for the independence of Balochistan province from Pakistan.

Some experts say that the group has links to India.

"The Balochistan Liberation Army is being funded by India," defense analyst and retired general Amjad Shoaib told DW. "Baloch insurgents are being supported and trained by Indian intelligence agencies. The Pakistani government expected that such an attack could be perpetrated. Authorities are now taking an action against those involved in it."

However, others believe the attack was a response to socioeconomic grievances in the country.

"Those who talk about these issues are targeted by the state," Khurrum Ali Nayyar, secretary general of the Awami Workers Party in Karachi, told DW. "Baloch politicians who believe in peaceful political struggle have been marginalized."