Pakistan′s disappearing temples and churches | Asia | An in-depth look at news from across the continent | DW | 03.12.2012

Rights activists say that places of worship for minorities in Pakistan are either rapidly disappearing or are subject to negligence by the state. A pre-Partition Hindu temple was recently razed in Karachi. 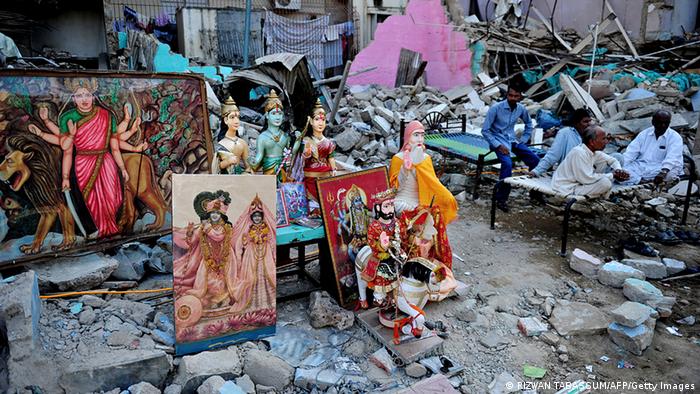 Hindus in the Pakistani city of Karachi demanded retribution after one of their temples and some houses were reportedly demolished on Sunday in one the busiest areas of the city. Pakistani authorities say that a court order allowed some buildings to be demolished but they deny that the temple was razed.

Ramesh Kumar Vankwani of the Pakistan Hindu Council told the media that there had been a long-running legal dispute between a builder and the Hindu residents of the area over the land. He said that the land belonged to the Hindu residents and not to the builder as claimed by the authorities.

Abdul Hai, a senior official of the independent Human Rights Commission of Pakistan in Karachi, told DW that the court order did not allow the builder to demolish the buildings. "There is no complete judgment on the dispute yet," Hai said. 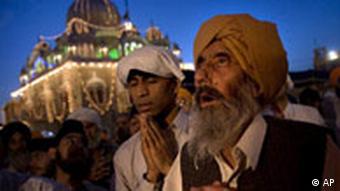 There are a number of Sikh temples in Pakistan, particularly in the Punjab province

Hindus make up 2.5 percent of the 174 million people living in Pakistan. The majority of them, over 90 percent, live in southern Sindh province.

It is not the first time in the Islamic Republic of Pakistan that a temple or a church has been demolished by members of the majority Muslim community for commercial or religious purposes. Rights organizations in Pakistan report widespread social and cultural discrimination against minorities.

Experts say that the worshipping places of Pakistani minorities are being increasingly targeted not only by Islamic extremists but also by common Pakistanis. Attacks on the members of religious minority groups and their holy places have increased manifold in the country over the years.

Amarnath Motumal, Vice Chairperson of Pakistan's Human Rights Commission's Sindh Chapter, and also a member of the minority Hindu community, told DW "religious extremism" was the main cause of attacks on Hindus and their holy places.

"These people think that by attacking Hindus or their places of worship, they have earned a place in heaven," he said, adding that Pakistani Hindus "are very scared and not getting any help from anywhere."

Hai also agreed with Motumal: "Sometimes there are commercial reasons behind these attacks. But most of the time, the temples and churches are attacked for religious reasons," Hai said. "Religious fanaticism is growing in Pakistan and religious extremist groups are getting stronger by the day. Unfortunately, the government is not doing anything to protect minorities and their places of worship."

Karachi-based columnist and writer Peerzada Salman told DW that the one of the first temples was demolished in the early 1990s as a reaction to the destruction of the Babri Mosque in the Indian city of Ayodhya in 1992.

“It all began after Hindu extremists demolished the Babri Mosque. As a reaction, not only Hindu temples but a number of churches were also destroyed in Pakistan.” 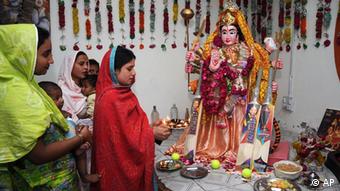 An increasing number of Hindus are migrating to neighboring India

Rights activists also point out at the negligence of the government to look after these places, many of which are historical and cultural landmarks. Experts see the demolition of these temples and churches as the destruction of the region's rich and diverse culture.

"There is a mandir (temple) in the Malir area of Karachi which was a fine architectural piece of work. The statues of Hindu deities in the temple were delicately sculpted. When the temple was attacked, people also destroyed the statues," Salman said. "These are not just places of worship; they are Pakistan's architectural heritage.”

Salman further criticized the government for not investing in the upkeep of these sites and instead closing them down.

Experts say that there are still hundreds of temples and churches in Karachi and other parts of Pakistan which need state support. They say that the government is either too afraid of extremists or lacks the will to save these places.

For hundreds of years, Hindus and Sikhs have lived in Afghanistan. But even after the fall of the Islamist Taliban regime, they face growing discrimination, forcing many to leave. (03.12.2012)

The recent case of kidnapping and 'forced' marriage of Rinkle Kumari, a Pakistani Hindu girl, has made the minority Hindu community in Pakistan feel unsafe as they seek refuge in neighboring India. (09.03.2012)