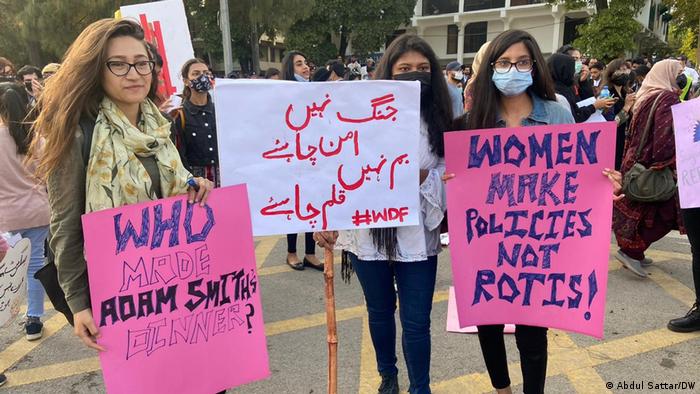 Women demanded equal rights, an end to forced marriages in the name of culture and religion, and an end to sexual harassment

Mask-wearing protesters marched in Islamabad, Lahore and Karachi on the International Women's Day

to demand equal rights for women, Pakistani media reported on Monday. The organizers made it mandatory for protesters to maintain social distance during the coronavirus pandemic. They also encouraged protesters to take their demands to social media, according to the Pakistani newspaper DAWN.

The rallies come after a 2020 march was attacked.

Some women marched wearing the traditional Pakistani outfit Salwar Kameez, and others hung dresses on clothing lines across the street to symbolize domestic abuse.

A Twitter user posted a video of the clothing.

The women marching also held colorful banners to demonstrate their demands. The organizers of the rally in Islamabad shared images of the banners, with the post reading: "We are reclaiming our city."

The Women Democratic Front, a coalition of women's rights groups, shared a video showing women dancing during the rallies, describing the event as  "a feminist celebration that no one will ever forget."

Women in Pakistan report sexual harassment and injustice.  The Aurat March (Women's March) in Lahore has described the 2021 rallies' as a protest against the "patriarchy pandemic."

Protesters are demanding an increase in the health care allocation in next year's fiscal budget and transparency on how this increase will reach women and transgender communities.

They also call for access to vaccination regardless of gender or ethnic background and putting an end to privatizing the health care system.

Other demands include recognizing denial of contraception by family members as domestic violence and subsidizing menstrual products.

Protesters accused of being 'un-Islamic'

Conservative and right-wing groups have spoke out against the rallies.

A few days before the march, the hashtag #ForeignFundedAuratMarch was trending on Twitter as thousands of users took to the social networking platform to bash the protests.

Some users claimed that the activists organizing the protests were receiving funding from foreign nations to "corrupt Pakistani women." Others said Islam already respected women and rallies would "spread immortality."

Pakistan is one of the world's most dangerous countries for women. Women experience various types of violence including sexual assault, murder and abduction. The first Aurat March was held in Karachi in 2018, but the rallies have since spread to all major cities, according to the DPA news agency.

Islamists oppose feminist slogans, including "my body, my choice," as such attitudes contradict a fundamentalist belief that humans do not have autonomy over their bodies.

Despite online insults, the situation did not escalate the way it did last year when Islamists launched counter protests and stoned the women's march, injuring three.