The death toll from a heat wave in southern Pakistan has risen to more than 450 over the past three days, and hospitals are overflowing. Power outages have exacerbated the problem, shutting down water supplies. 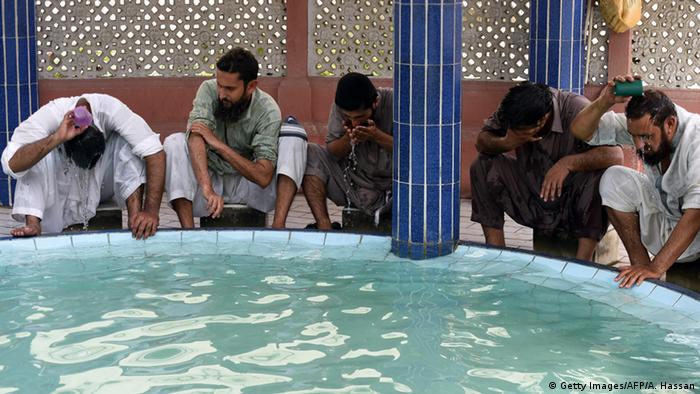 Officials said Tuesday that the death toll had risen to some 450, with thousands needing hospital treatment. At least 10 more died in other parts of the Sindh province.

The majority of deaths were in the port city of Karachi, which is Pakistan's economic hub and largest city. Provincial Chief Minister Qaim Ali Shah issued an order closing all schools and public offices until the heat wave ends.

Since Friday, temperatures have soared to 45 degrees Celsius (113 degrees Fahrenheit).

Seemi Jamali, a spokeswoman for Karachi's Jinnah Hospital, said most of the dead were elderly. However, she said hundreds of others were being treated for heat-related ailments, including fever, dehydration and stomach-related illnesses.

Dr. Nadeemuddin Siddiqui, of the Karachi Health Care Hospital, identified heat stroke as a major cause of death. Many of the victims are laborers who work in the sun.

"Heat stroke affects the heart, brain, kidneys and other vital organs," said Siddiqui. "The patient feels nausea, confusion and slips into a coma. If that's what happens, recovery is very difficult. This is what's happened in Karachi, where so many people have died."

An official from the National Disaster Management Authority told the AFP news agency that heat stroke treatment centers were being established across the province.

The heat wave - said to be the worst in a decade - has come during Ramadan, when healthy adult Muslims are expected to refrain from eating food and drinking liquids. Prominent Islamic cleric Tahir Ashrafi told AFP that individuals at risk of heat stroke should abstain from fasting.

"Patients and travelers who are not able to bear fasting can delay it and people who are weak or old and are at risk of falling sick or even dying because of fasting should abstain," he added.

The situation has also been exacerbated by power outages, which have crippled the city's water pumping system.

While temperatures remained at about 44.5 degrees Celsius on Tuesday, thunderstorms were forecast to bring cooler temperatures.