Violent clashes between police and supporters of the radical Tehreek-e-Labaik Pakistan party broke out in Lahore on Friday as the group started marching to Islamabad to demand the release of its jailed leader. 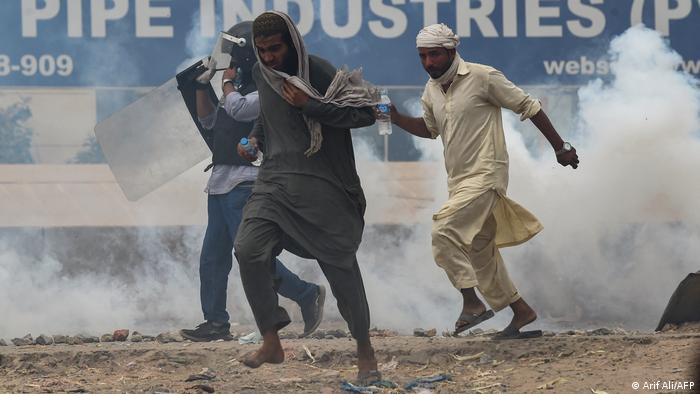 The hard-line Islamist party Tehreek-Labbaik Pakistan (TLP) said on Saturday that "at least seven" of its supporters had died in clashes with authorities in the eastern city of Lahore.

Spokesperson Saddam Bukhari also said hundreds more had been injured after the brutal use of force by police.

Thousands of TLP supporters have blocked roads and fired projectiles on the second straight day of clashes with police.

Rana Arif, a Lahore police spokesman, told French news agency AFP on Saturday that officials were carrying out "a defensive operation against the mob. ... We are only doing shelling to control the crowd."

Why is the TLP protesting?

TLP supporters had gathered on Friday to march to the capital, Islamabad. They are demanding the release of their detained leader Saad Rizvi and the expulsion of the French ambassador.

Rizvi was arrested in 2020 during demonstrations against the publication in France of caricatures of Islam's Prophet Muhammad.

The Pakistani government and TLP have formed committees to hold talks to end the demonstrations.

"If the government was serious, we are ready for talks," Saddam Bukhari said.

DW reporter Shamil Shams, however, says there is a risk of "more bloodshed" as the Islamist party is unlikely to "budge from their demands until there is a military intervention."

He said that the civilian governments "do not hold much power over Islamist parties."

Interior Minister Sheikh Rashid Ahmad, who had been in Dubai for the T20 cricket World Cup, returned to Pakistan on Prime Minister Imran Khan's order to monitor the situation.