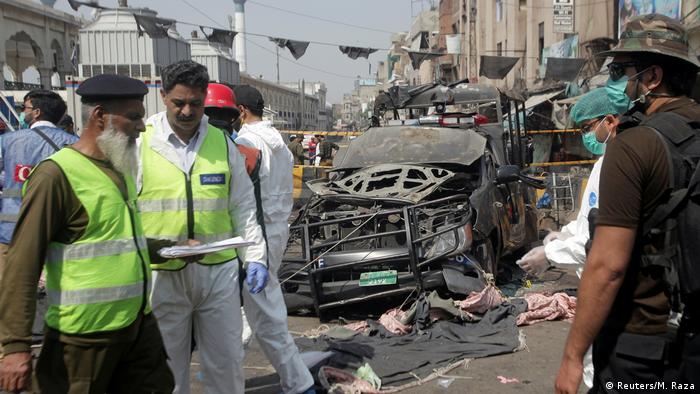 A bomb exploded near a major Sufi shrine in the Pakistani city of Lahore on Wednesday, according to police.

Hundreds of pilgrims were at the Data Darbar site as the country marks the holy month of Ramadan.

State TV showed pictures of badly-damaged patrol cars. "It was an attack on police that left several dead and dozens of policemen and civilians injured. The target was police," said Syed Mubashir Hussain, a spokesman for the Lahore police.

Muhammad Farooq, a spokesman for the city's rescue services, said a rescue operation "is under way and we have moved 15 people to hospital."

Police official Muhammad Kashif said the bombing "may have been a suicide attack."

"This attack was carried out at a time when there were no civilians near the police," said Abdul Aziz Yousafzai, spokesman for the Hizbul Ahrar militant group, a faction of the Pakistani Taliban.

Pakistan's security situation: Authorities have stepped up the security measures since the country's worst terrorist attack killed more than 150 people at a school in Peshawar in 2014. However, extremist groups are still able to conduct deadly attacks. Lahore has witnessed several attacks in recent years, including a bomb targeting Christians celebrating Easter in 2016. More than 70 people were killed.

What is the Data Darbar? Built in the 11th century, the Data Darbar is the burial site of the saint Ali Hajveri and is one of the largest Sufi shrines in South Asia. Tens of thousands of pilgrims visit the site each spring on the anniversary of the saint's death. It was hit by a suicide attack in 2010 that left over 40 people dead. Since then, it has had a heavy security presence.

Why was the shrine targeted? Sufism is a mystical form of Islam. Its followers have frequently been targeted by militants, who view rituals at the graves of Muslim saints as "un-Islamic."