Highly addictive crystal meth, also known as "ice," is growing in popularity among rich students and young people in Pakistan. Drug treatment is complicated by many families keeping addiction issues a secret. 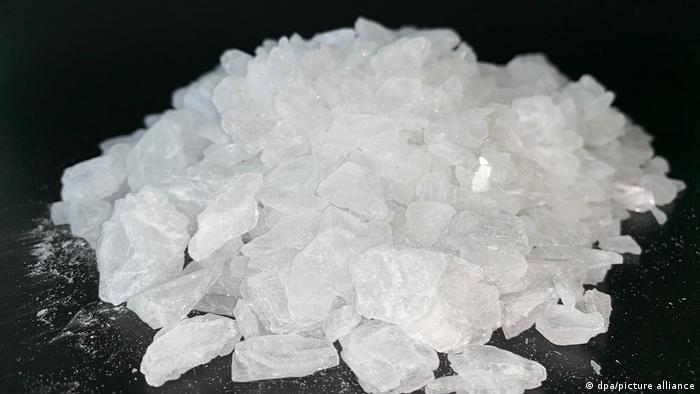 A rising number of people in Pakistan are using crystal methamphetamine, and addiction specialists say more students and members of the educated, upper class are being attracted to the drug.

Around 27 million people struggle with drug abuse in Pakistan, according to the country's anti-narcotics force.

The recent emergence of meth abuse in a younger, educated demographic is alarming addiction specialists, as there is little data available to assist with treatment. Many families in Pakistan keep drug issues a secret, but some people are willing to share their story.

Sufyan Ali, a 25-year-old from Rawalpindi, helped support his family and worked with his father.

However, last November, Ali became interested in crystal meth. A man who would frequent get-togethers organized by Ali introduced him to the drug. It was shared by four friends, Ali explained.

Crystal meth can be ingested orally, smoked, snorted or injected. Effects include enhanced sex drive, feelings of euphoria and a reduced appetite. It is also one of the most addictive drugs of abuse.

"At first, it created a strange ecstatic feeling but as time passed, it made me irritable and ill-tempered. It is ruining my life and bringing a bad name to my family that is now plunged into crisis," Ali told DW.

After Ali's family ended up discovering his drug use, he was admitted to a rehabilitation center in Islamabad.

"I have been here for more than three months, improving and planning to go abroad for work," he said.

"But I am worried about my friends who did not get the treatment and are still indulging in this lethal addiction," he stressed.

Loads of meth found at schools

Crystal meth, if consumed consistently, can be "a more addictive stimulant than others, its users become risky, violent, prone to anger and being hostile," Naila Aziz, Lahore-based clinical psychologist, told DW.

"It's unfortunate that this is more common among the educated classes," Aziz, who works with treating drug addiction, added.

Peer pressure is the biggest factor contributing to the addiction and has become a big concern for members of the middle and upper classes of the country, she told DW.

Meth dealers are well connected, said Lubna Sajid, an Islamabad-based psychologist. Some dealers get new addicts admitted into educational institutions so they can peddle drugs to students, she added.

Punishment for selling crystal meth can be two years in prison and a hefty fine – or both, if the person is caught carrying 100 grams or less. The weight of the drugs caught has a direct influence on the length of jail time.

Javed Iqbal, a police official from Karachi, told DW that punishment rates for petty meth use are low, and depend on the region and the official dealing with the case.

One reason why there is such little data on addicts is because parents and family members conceal information fearing social backlash, said Malik Nazeer, who runs the Faisalabad drug addiction treatment center. Nazeer believes the number of meth users could be in the tens of thousands.

Data suggests that both men and women use meth. However, it is harder for women to receive drug abuse treatment in conservative areas in Pakistan.

Khan said he refers female patients to treatment centers in Punjab and Islamabad, as being candid about female drug use is difficult in the conservative KP region.

As more young people turn to drugs like meth in Pakistan, the propensity of families to keep addiction a secret threatens to create a big dilemma for Pakistani society.