Argentina's government says it plans to re-open an investigation into alleged money laundering involving the widow and son of Colombian drug lord Pablo Escobar. Officials say they were "middlemen" in an illegal scheme. 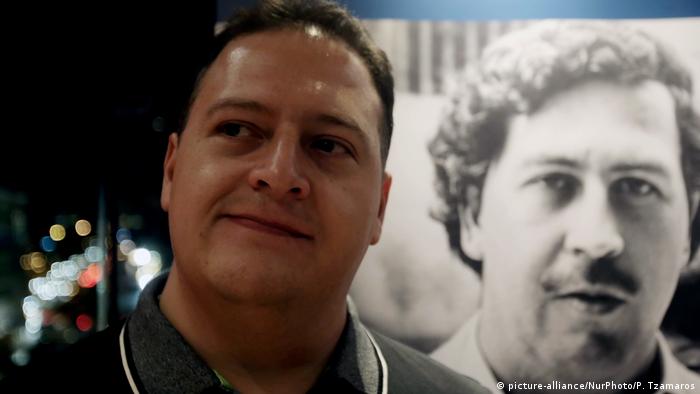 Juan Pablo Escobar, also known as Sebastian Marroquin, at the launch of his book about his notorious father in March, 2017

Argentinian authorities accuse Escobar's wife and son, Victoria Henao and Juan Pablo Escobar Henao, of having ties to a criminal organization that used real estate and other businesses to launder millions of dollars.

The South American country's judiciary closed an investigation into the money-laundering allegations in 2000 citing insufficient evidence.

Security Minister Patricia Bullrich said the government was now hoping to re-open the probe following a request from the Financial Information Unit (UIF), an anti-money laundering watchdog, that the family face questioning about their alleged ties to Colombian drug dealer Jose Piedrahita.

All three are suspected of acting as intermediaries between Argentine businessmen and Piedrahita.

No country for laundering

Bullrich said Escobar's widow and son had received payment for introducing Piedrahita to Argentinian executives during one of his trips to the country.

"Argentina is no longer a friendly country for neither drug trafficking nor for money laundering," she said.

Mariano Federici, the head of the UIF, also alleged that former footballer Serna "eased the entry of Piedrahita's funds into Argentina through swapped real estate operations, here and in Colombia."

Sins of the father

The United States has been seeking to extradite Piedrahita since his arrest in Colombia last month. The US Department of Justice says he bribed a federal agent with cash and prostitution in an attempt to get his name removed from a cocaine-smuggling case.

Authorities in Colombia, Argentina and the US allege he laundered around $15 million (€12.8 million)  in drug money through the "Los Angelitos" cafe in Buenos Aires and a company called "Rojo Tango."

Victoria Henao and the two children she had with Pablo Escobar have been living in exile under new identities in Argentina since the mid-1990s after the drug lord was shot dead by police. As head of the powerful Medellin Cartel, Escobar turned over billions of dollars in annual income from cocaine trafficking, becoming one of the richest criminals in history.

Serna played for the Colombian national football team between 1993 and 2001, and also helped the Boca Juniors to win South America's Copa Libertadores in 2000 and 2001.