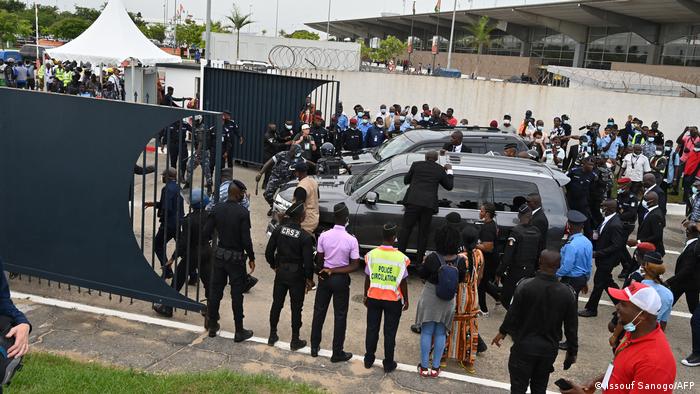 Police dispersed some of Laurent Gbagbo's supporters at the Abidjan airport

Police fired tear gas at supporters of Laurent Gbagbo as they gathered to welcome the former Ivory Coast president at the airport of the country's largest city, Abidjan, on Thursday.

Gbagbo's spokesman also said that buses carrying his supporters were blocked from reaching the airport. After meeting his wife Simone, Gbagbo boarded an SUV for a ride to his party headquarters, with supporters cheering and running alongside his motorcade.

He is also expected to make an appearance in his home village of Mama.

Before taking off from Brussels, Gbagbo's attorney Habiba Toure told the AFP news agency that the politician was "happy, enthusiastic and wants to play his part to try to reconcile Ivorians. He needs to talk to his people."

Why was Gbagbo away?

The 76-year-old Gbagbo served as president between 2000 and 2010. In 2010, he refused to acknowledge electoral defeat to his rival and current president Alassane Ouattara. Gbagbo's stance prompted a brief but bloody civil war. Over 3,000 people lost their lives in the conflict. 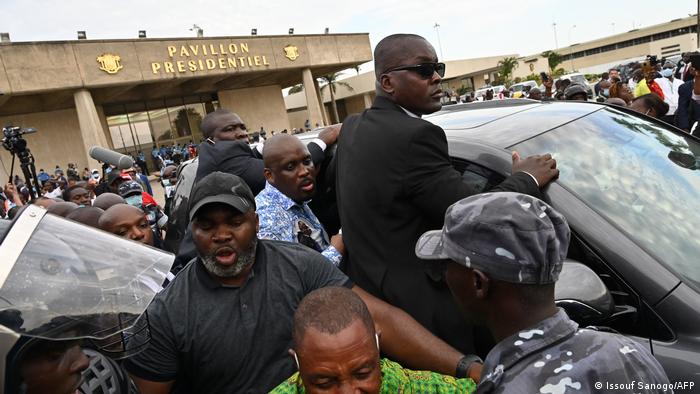 Ouattara was ultimately declared the winner and — in 2011 — Gbagbo was extradited to the International Criminal Court to face charges of war crimes and crimes against humanity. The court eventually acquitted him in 2019, with the final appeal rejected in March this year.

How do people in Ivory Coast feel about Gbagbo?

The current president has since publicly embraced Gbagbo's return as a symbol of reconciliation. However, many fear that Gbagbo will re-enter the political arena and destabilize the West African country.

The ousted leader still boasts some 46% support in Ivory Coast. In Gbagbo's political stronghold of Yopougon in Abidjan, his supporters crowded the streets and chanted "Gbagbo is coming, we will install him." 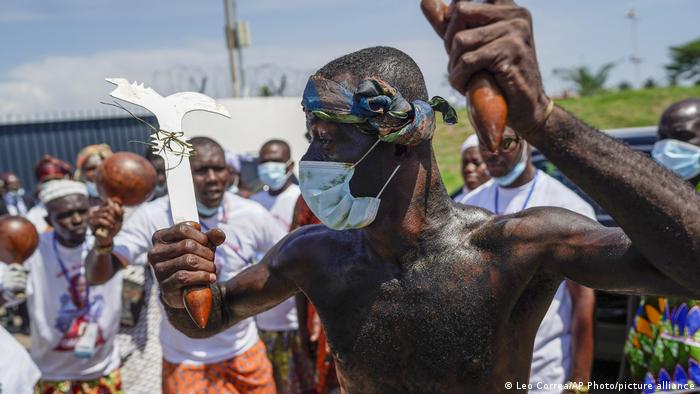 Gbagbo supporters celebrated in front of his party's headquarters in Abidjan

"It's a great day for me to go and welcome Gbagbo," said demonstrator Liliane Kokor outside his party headquarters. "He is finally arriving in his country to give us hope."

What can Ouattara do to counteract Gbagbo?

The politician himself has been tight-lipped on his plans for the future. In turn, President Ouattara was also vague when discussing a domestic court case against Gbagbo. In 2019, Gbagbo was sentenced in absentia to 20 years in prison for misappropriating funds from a regional central bank during the violence.

Ivory Coast political scientist Ousmane Zina says Outtara is likely to use the case to pressure his old rival.

"Before granting a pardon or amnesty, he will want to obtain a guarantee that the country will remain peaceful," Zina said.