Otfried Höffe: 'Freedom of art: no limits, no excuses'

According to Immanuel Kant, the idea behind the separation of church and state should extend to art. Contemporary philosopher Otfried Höffe believes that Islam will eventually come to the same conclusion. 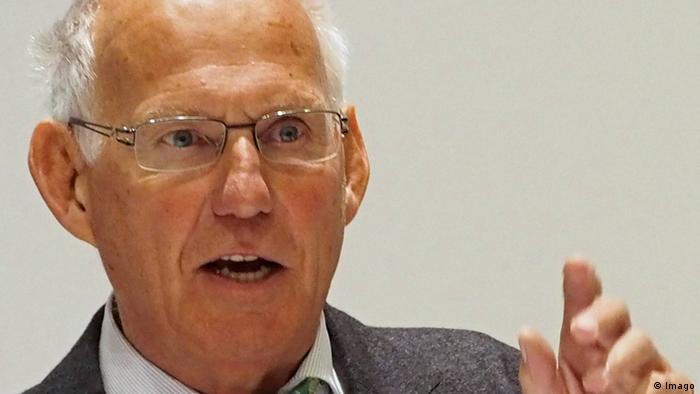 Professor Otfried Höffe: There are two aspects, two polar opposites to my definition of freedom, and they complement each other. On the one hand, freedom encompasses the concept of being independent of heteronomy, the notion of being controlled or dictated by others. On the other hand, freedom also means having the right and the ability to lead your life according to your own agenda.

DW: Is your definition of freedom applicable to cultures other than those in the Western hemisphere, or is this kind of freedom a privilege reserved for the West?

Höffe: The pursuit of freedom is a universal privilege. People from all walks of life and down through the ages have always yearned for freedom and have always tried to combat every form of repression - and they still do. Everyone has a right to hold a degree of freedom compatible with the degree of freedom allowed to be exercised by everyone else.

DW: What does that imply for societies that are going through major changes, especially in Arab countries and in Asia, where the concept of freedom is usually considerded secondary to other values?

Höffe: Let's take a look at Islam then. We must not forget that from the 9th to the 11th centuries, Islamic culture - in many ways - led the world with its scientific discoveries and cultural evolution. But that period of flourishing advancement suddenly stopped, unfortunately.

It would be helpful if Islam recalled its days of glory and began to examine not only its status not only in the world at large, but also among its adherents. Are people grateful to be subjugated either directly by their religion or by those who exercise positions of authority on its behalf? Why do the citizens of these countries think that life could be better elsewhere in the world - regardless of justified criticism of the West? These are the kinds of questions those in power should ask themselves. And in the Islamic world, such people include both political leaders and those who exercise religious authority.

Islam cannot escape from the Enlightenment

DW: Our own interpretation of freedom is highly influenced by achievements of the age of Enlightenment, including philosophical ideas introduced by Immanuel Kant and the beginning of the separation of church and state. In recent years, many experts have called for a similar age of Enlightenment for Islam. What are your thoughts on this?

Höffe: Islam cannot escape its own ultimate enlightenment, its own emancipation, at least not on the long run. This won't occur because we in the West demand it however, but because Muslims will eventually come to the realization that such a shift would be in their own best interest. Let's look at the 9th century again: Caliph Harun al-Rashid's son, known during 'Islam's Golden Age' as Harun the Righteous, established an academy for translators in Baghdad to have all the works of the great Greek philosophers and early scientists translated into Arabic. He was responsible for ushering in an era of illumination across the Islamic world.

So no one can claim that the idea of Enlightenment is alien to Islam. But the religion needs to regain the courage to act in those terms once again. There's nothing wrong with us in the West calling for that as well. We don't want to dictate our own terms on Islamic countries. But the fact remains that many Muslims living amidst European cultures are torn between two worlds. These people also deserve the right to live according to their own agendas. They should feel empowered to reconcile Islam, their religion, with the understanding freedom as is practiced in Europe.

The autonomy of art

DW: You touched on the subject of Islam's Golden Age, marked by innovation in culture and art. Nowadays, Islamist extremists see art as an enemy. The tragedy at "Charlie Hebdo" is the epitome of how people who reject the idea of freedom - and the West as a whole - unload their anger and hate on innocent people. How can we express our opposition to such carnage and the reasons behind it to these people?

Höffe: We must remember that, in the West, art itself had to fight for and gain its own liberties. That happened as people slowly progressed in achieving personal freedoms. Over the course of several centuries, art grew independent of controls. It is no longer expected to be truthful, or even moral. None of these pretenses apply. Instead, simply falling under the category of 'beauty,' art has managed to carve out its own territory. Kant described that concept with the term "disinterested pleasure," which implies that just as church and state are separated in the West, our understanding of art is also independent of church, state and even aesthetic ties.

The West has also had its fair share of historical periods during which things like blasphemy and lese-majesty were punishable by law. Those statutes have long disappeared from the books, while the struggle to attain the same degree of freedom goes on in other cultures that still have a different view of the purpose of art. We Europeans cannot change that on their behalf, but we have every right to set an example and to demonstrate how societies flourish when they grant their artists a total sense of freedom.

DW: It's not just a question of aesthetic values. When you look at Charlie Hebdo, it's plain to see that the underlying issue is politics. This isn't about our hard-fought liberties. It's about what others consider blasphemy. When it comes to defending freedom, where do you draw the line?

Höffe: You can explore what Charlie Hebdo originally tried to accomplish by publishing all those caricatures of Mohammad. I think the main purpose was to pose a challenge - directed at Muslim citizens - to learn to accept that when it comes to freedom of art, there can be no restrictions. Or to paraphrase Kant's apt words, the caricatures could be seen as an appeal to "have the courage to use your own mind." But I suspect that that call to the public has long fizzled out. And, as we have painfully observed, that it had the complete opposite effect: instead of championing tolerance, the drawings provoked aggression and violence.

We mustn't forget however that here in Europe - and also in America - it also took us a long time to even begin to acknowledge that when you grant people universal freedom of expression and freedom of art, there's an intrinsic risk of violence. We only reached this point because we always had creative trailblazers. We must allow Muslim societies to learn these kinds of lessons for themselves. But we cannot allow these lessons to be learned with violence. We have to fight that - even if some small part of the resentment may be justified. We cannot allow resentment to escalate into violence.

Freedom must be protected

DW: But are we not endangering our own freedom with all the self-censorship in the wake of the Charlie Hebdo massacre, when many artists and intellectuals feared that they would fall victim to terror attacks?

Höffe: I believe freedom will remain one of our highest values and greatest achievements. But it needs protection. Forces that threaten our freedom come both from the outside and, in response, from within. For a long time, we've largely ignored the necessity to protect our freedom. Now that we find ourselves facing all these threats, we have to balance the value of freedom against the value of safety. Depending on cultural differences, such balancing acts can have different results.

Germany, for instance, does not believe in engaging in overt mass surveillance - while surveillance cameras have become widespread in the UK. That is not to say that the British are any more or any less inclined to give up their freedom for the sake of safety. That would be a false conclusion.

DW: How will our values be affected by all this?

Höffe: Personally, I'm not really all that worried that the public discourse about values will lead to liberty being reduced or sacrificed to security measures hostile to the tenets of freedom. Should, however, that scenario come about, we'd end up living in what Austrian-British philosopher Karl Popper called a "closed society." Defending pluralism and tolerance would then be left to those who opposed that social order. It would force them to vociferously defend our liberties and stand up for an "open society."

Otfried Höffe (born in 1943) is one of Germany's leading philosophers. Over the years, Höffe has contributed to many professional journals, probing ethics, law, economics and state affairs from a philosophic perspective. His latest publication, "Kritik der Freiheit" (translation: "critique of freedom"), available in German at the C.H. Beck Verlag, examines the benefits and drawbacks of living in a free society.