A central module for America's new Orion spacecraft comes from Europe and was manufactured in Germany. It's a major step in transatlantic cooperation in space exploration. 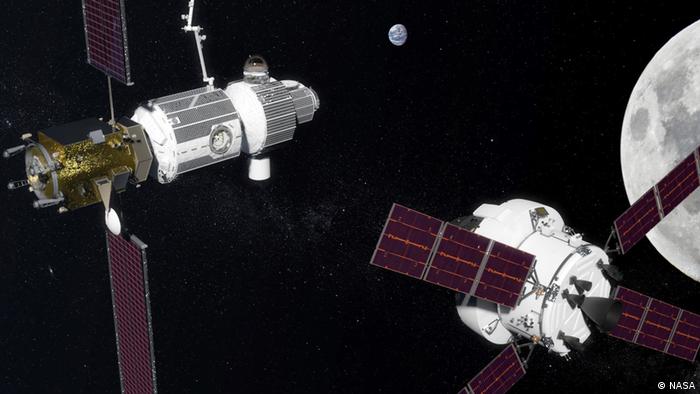 A look into the future: Orion heads for the planned lunar orbital station 'Deepspace Gateway'

The Orion spacecraft is NASA's most important manned spaceflight project for the coming decades. For the first time since the end of the shuttle flights there will once again be a spaceship with which western space agencies can make themselves independent of the Russian Soyuz capsules.

Orion is set to take off in 2020 — initially unmanned — and circumnavigate the moon several times. The project is called "Exploration Mission 1." Later, the spacecraft, also known as the "Multi-Purpose Crew Vehicle" (MPCV), will fly to the moon orbital station Deep Space Gateway and probably even to Mars.

Orion thus differs significantly from the smaller space transporters, such as the Dragon 2 from Space-X or the Boeing CST-100 Starliner. These two spaceships, built by private companies on behalf of NASA, will bring astronauts to the International Space Station as early as next year.

Europeans at the helm

The European Space Agency (ESA) is responsible for the European Service Module of the Orion spacecraft (ESM-1). It was assembled by engineers at Airbus in Bremen, where on November 2, 2018, it was handed over to NASA in a ceremony. Three days later, the module will travel by plane to the Kennedy Space Center in Florida.

The ESM-1 is at the heart of Orion. It sits below the crew capsule and contains the main engine as well as four solar sails to supply power. It not only controls climate and temperature, but is also responsible for the complete supply of fuel, oxygen and water to the spacecraft. Orion could not fly without the ESM and European Space Agency experts are already building another one for a second, then manned moon mission.

Read more: Are astronauts stuck on the ISS? A few questions and answers 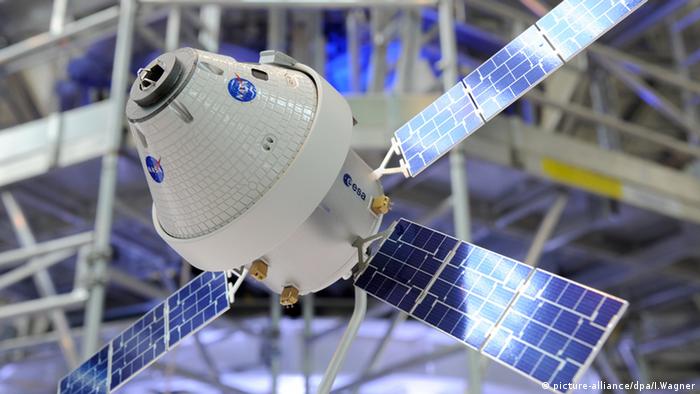 A model in the Airbus factory in Bremen. The service module — the rear part with the solar panels — was manufactured here

"The fact that NASA is giving us Europeans such a critical element in a project so central for the future is an enormous sign of confidence," says Walther Pelzer, executive board member for space management at the German Aerospace Center (DLR). The ESA had already demonstrated its capabilities during the construction of the unmanned Automated Transfer Vehicle (ATV), which regularly delivered supplies to the ISS from 2008 to 2015. It is now drawing on this experience.

"The provision of the ESM by Europe is part of a transatlantic barter trade," explained Johannes Weppler, ESM program manager at DLR. "It serves as compensation for the costs of operating and supplying the ISS, which are borne by NASA."

US astronauts will continue travel with Russian spacecraft

NASA and Roskosmos are continuing their joint flights to the ISS until 2017, according to an agreement both sides signed. After 2017 NASA aims to return to space on their own. (06.08.2015)

US space agency NASA has succeeded in launching its Orion spaceship on a test flight after a failed first attempt. If all goes according to plan, the spacecraft may one day carry people to Mars. (05.12.2014)