Organic and fair trade produce at Berlin's celebrated agricultural fair, International Green Week, are doing better business than ever, amid a dioxin scandal that has sapped confidence in conventional German farming. 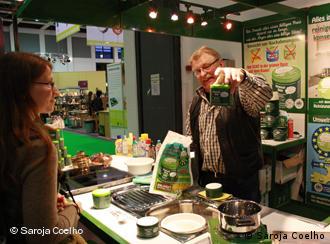 There isn't a seat available in the food courts in the fair trade and organics section of the International Green Week agricultural fair in Berlin.

Patrick Hahnel, the co-owner of Spice for Life, chats with customers at his booth. "It's not just organic on the inside, it's organic on the outside," he said, flipping over one of the packages to show the blue angel eco-label.

He says his products contain no genetically modified ingredients or synthetics, and that the packaging is chemical free and biodegradable.

"We want to improve our little part of the world. Sustainability is a big word and you have to combine this with action," Hahnel said. 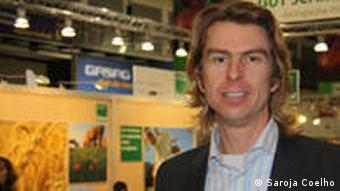 In a neighboring stall, a soap vendor describes his all-purpose cleaner to a couple who don't look convinced.

"People are becoming more environmentally aware and they are buying our products because they don't contain harmful chemicals, like in other products," he said. Despite the hefty 25-euro price tag, the couple is convinced and agrees to take two jars.

Not everyone is as easily won over. Ilsa Schweitzer is on her way to the livestock area with her children and passes through the organics section on her way there. She says she finds the prices exorbitant and questions the credibility of some of the vendors.

"These apples here which are organic, but they were put on airplanes to get them here. Isn't that a little hypocritical?" 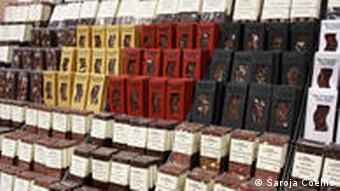 Germany's recent dioxin scandal, in which contaminated animal feed was sent to poultry and pig farms, may be part of the reason the organics section is seeing such good sales this year.

As details of the contamination made headlines, consumers flocked to higher-priced organics even though they cost up to two or three times as much as conventional food.

For Elmer Sech, from the Federal Program for Ecological Agriculture and Sustainable Farming, says the scandal has provided an ideal opportunity to raise awareness about the true cost of food.

Conventional food, he says, would be much more expensive if its price tag included the environmental and health costs of pollution and soil depletion.

He said the agricultural sector would only foot part of the bill for the dioxin scandal. "Our taxes will be used too." 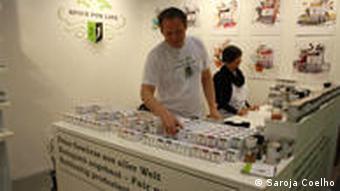 Organic stalls have been part of International Green Week for more than a decade. But this is only the second time that the event has included areas for fair trade farmers.

Dyborn Chibonga is with the National Smallholder Farmers' Association of Malawi. He has come here to convince food-buyers that they can participate in environmental stewardship and social responsibility schemes, while still drawing healthy profits.

He explains that in Malawi, and many other developing nations, farm workers typically receive a tiny fraction of the revenue generated by their crops.

Consumers, he says, have the power to change that. "If you care about the person who has produced this product, in order to bring it to your supermarket, or to your table, then you have to be willing to pay a little bit more," he said.

"It has been produced under conditions which are fair for workers, fair for the producer, and fair for the environment."

European Union agriculture ministers have said that stricter bloc-wide measures were needed to prevent a repeat of a damaging dioxin poisoning scare in farm produce in Germany earlier this month. (24.01.2011)

The annual International Green Week, touted as the world's largest agricultural fair, has opened in Berlin just as the country recovers from a dioxin animal feed scandal that has damaged the food industry. (22.01.2011)

Agriculture ministers get tough to prevent repeat of dioxin scandal

Germany’s federal states have agreed on tough measures, including possible prison terms for offenders, in an effort to prevent a repeat of the dioxin scandal that has severely damaged the agriculture industry. (18.01.2011)