Thailand’s main opposition party will boycott February’s election, saying the people "have lost their trust" in the country’s political system. The party's leader said democratic reforms were needed prior to any vote. 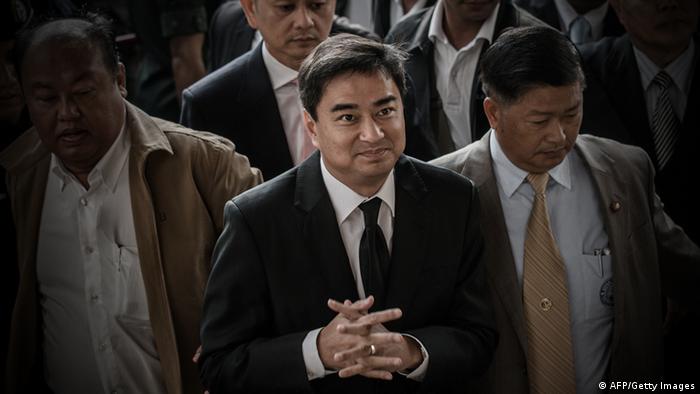 The executive committee of Thailand's Democrat Party met on Saturday to discuss the move, emerging to confirm their stance. The decision comes a day before a planned mass protest in Bangkok.

"The Democrats think the elections will not solve the country's problems, lead to reform, or regain people's faith in political parties," Democrat Party leader and former prime minister Abhisit Vejjajiva (pictured) said in a press conference following the meeting.

"I think if the Democrats ran in the election, we might get the most votes and be able to form a government - but then again people will be mobilized to rally against our party."

He added that people would "not have confidence" in any new government unless political reforms were agreed beforehand.

Incumbent Prime Minister Yingluck Shinawatra called the February 2 elections amid increasing calls on her to resign. Mass protests over the perceived influence of exiled former leader Thaksin Shinawatra - Yingluck's elder brother - led her to dissolve the government on December 9. The demonstrations began in November after an amnesty bill was passed that could have cleared Thaksin of his corruption charges. It was later shelved.

Yingluck remains interim prime minister, but protest leader and former Democrat Party member of parliament Suthep Thaugsuban had said the election would not go ahead if she stayed in the role. The Democrat Party has distanced itself from disrupting the election any more than the boycott, saying it would not "obstruct" polling.

Prior to the Democrat Party's announcement on Saturday, Yingluck formally proposed a plan for making political reforms after the election.

"The government agrees that reform is needed and is willing to cooperate. We reaffirm that the reform process can go ahead alongside elections," she said in a televised address.

Pro-Thaksin parties have won every election since 2001, but was once forced from power during a 2006 military coup. Yingluck's Pheu Thai Party is still expected to win the election, given its support from outside Bangkok.