Opioids in Africa: cheap and accessible

Cheap painkillers are the new drugs for the people. On the African continent, more and more people are becoming addicted and the illicit trade in pharmaceuticals is on the rise. 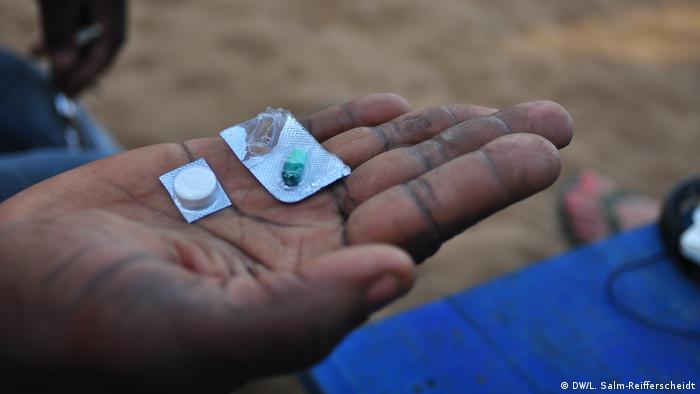 Heroin, cocaine, cannabis or alcohol – these are the kind of drugs most people think about on June 26, the United Nation's International Day Against Drug Abuse and Illicit Trafficking.

Fewer people think of the legal opioids such as cough syrup or painkillers, which can induce effects similar to those of heroin. The non-medical, recreational use of such drugs has risen dramatically in the last 10 years worldwide. Around the African continent, the drugs are easily accessible and are often smuggled across borders without any medical control.

The office of the UN Office on Drugs and Crime (UNODOC) has called the current situation a "crisis situation." "It's a very serious situation," Matthew Nice said in an interview with DW. Nice manages the so-called OPIOIDS Project at UNODOC. There are no exact figures, he says, but he and his colleagues recently alerted the UN to the severity of the situation in Africa, which especially affects countries like Ghana, Nigeria, Mali, Burkina Faso and Togo. The drug that mostly comes into focus is the painkiller Tramadol. "There's large scale trafficking of unregulated, illicitly manufactured sub-standard Tramadol throughout the region," he says.

One of the few countries which has reliable data on the crisis is Egypt. A UN supported study together with Egypt's health ministry found that around 100,000 people in the north African country are addicted to opioids, with half of them using Tramadol. It also found that two-thirds of patients being treated for addiction in Egypt's state institutions are addicted to Tramadol.

For over 15 years, the UN has warned countries about the illegal, yet increasingly professional trade in pharmaceuticals. "The synthetic opioid problem, in terms of the amounts seized annually, is on the same scale as global heroin seizures," says Nice.

Tramadol was initially developed by the German pharmaceutical company Grünenthal. It was brought onto the market in 1977 under the name Tramal. When the original patent expired, Indian generic producers started manufacturing the drugs on a large scale for the African market. Chinese, Nigerian and Ghanaian companies followed suit.

The trafficking of the drugs is relatively easy, explains Nice. After all Tramadol is a legal pharmaceutical and not an illicit drug. The problem is, however, not entirely confined to Africa. North American is struggling with similar problems. On the African continent there are fewer controls. For criminal networks, Africa is a perfect opportunity to earn money, says Nice.

The result is that the drug in flooding particularly West Africa. In Ghana, Tramadol – or "Tramore" – is popular and even used as a potency enhancer. In Gabon, it is called "Kobolo" and students are known to take it as a performance enhancing stimulant during exams. In Sudan's capital Khartoum, workers add a tablet of Tramadol to their tea to help them endure their physical work.

Read more: Fighting the spread of fake drugs in Africa

Tramadol:  The drug of choice

"You can buy Tramadol everywhere on the black market,” says Togoan psychiatrist Damega Wenkourama. He works at the Kara hospital in northern Togo and says that his facility is unable to deal with the high number of patients trying to get help for their substance abuse. The illicit Tramadol, available on the black market often contains extremely high dosages of the drug and is therefore especially addictive, says Wenkourama.

Nice from the UN supports this statement. "It's not typical tramadol pharmaceuticals that you would see, which are often 50 milligram tablets. But some of these are two, three, four hundred dosages which are far beyond typical dosages for human consumption."

"People take the pills as a stimulant before work. They feel stronger, more awake and more able to perform. But they quickly become addicted," he says. Wenkourama, who is currently conducting research on the drugs, isn't sure where the drugs that are available in Togo are produced, but he believes that they are smuggled in from the neighboring countries, Nigeria and Benin.

"There have been reports from some countries about extremist groups that are involved in this, as a way of both to provide the substance to their members, but also as a way to get money,” says Nice. Boko Haram in Nigeria, for instance, have been reported to be using the drugs to instill feelings of fearlessness and a readiness to fight in their members.

"What we're seeing on a large scale is lots of ‘grey market' which is basically lots of unregulated people – middle wholesalers that are selling these in huge quantities," explains Nice. The drugs are simply available in any large market. "Now whether the substances that they're selling you are really the substance – there have been many studies that suggest that that is not the case."

A British woman has been sentenced to three years in jail for smuggling the painkiller Tramadol into Egypt. The drug is illegal there because of its wide use as a heroin substitute. (26.12.2017)

On the front line of the opioid epidemic in the US

Cheryl, a 71-year-old woman from Phoenix, has adopted her 3-year-old great-grandniece Jessie, who was an addict before she was even born, suffering from drug withdrawal symptoms at birth. Eline van Nes reports. (04.08.2018)