War has raged in Yemen for over 500 days. The international community seems to be indifferent to the suffering there. This is detrimental to the credibility of the United States and Europe, DW's Matthias von Hein writes. 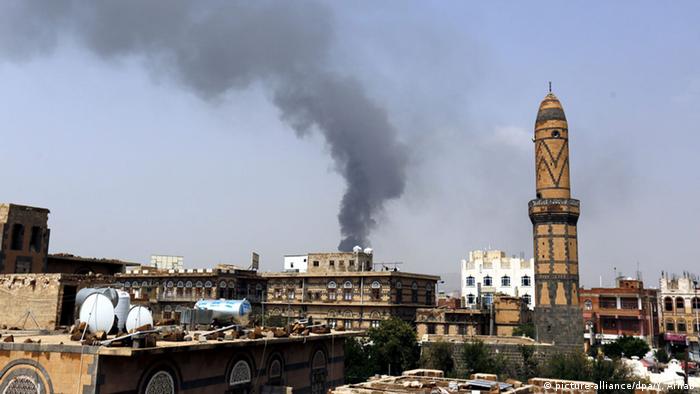 Since March 26, 2015, the richest country in the Arab world has bombed the poorest country into ash and rubble - and mostly without any outcry from the rest of the world. What's worse, Saudi Arabia does not operate on its own: It leads a coalition of nine nations and receives logistical support from the United States and the UK.

Of course, conflicts between Yemen's factions are older than 500 days, and lives had previously been lost in the conflict that has pitted Houthi rebels and allied supporters of former President Ali Abdullah Saleh against forces loyal to his replacement, Abed Rabbo Mansour Hadi, who had fled to Saudi Arabia when the uprising began. But the massive deterioration of the humanitarian situation was certainly caused by the Saudi-led military coalition's bombing campaign.

The dimensions of the suffering in the country of 25 million people are enormous. More than 6,000 people have been killed in these 500 days, 15 million depend on humanitarian aid, 3 million are displaced within Yemen, 1.5 million children are malnourished, and the nation's infrastructure has been largely destroyed: Hospitals, schools and refugee camps have all been bombarded.

In a confidential report submitted to the Security Council, the United Nations accused all warring factions - government troops, Houthi rebels and the Saudi-led coalition - of breaking international law and violating human rights. Only radical groups such as al Qaeda and the Yemeni branch of the "Islamic State" have benefited from the turmoil.

The world has looked the other way while Saudi Arabia drops internationally banned cluster bombs and when the kingdom, as it successfully did in June, blackmails the United Nations by threatening to pull funding for unrelated UN programs if the country is not dropped from the secretary-general's "list of shame," which calls out states and organizations that kill children or recruit minors for combat.

A UN report had revealed that the Saudi-led coalition is responsible for over 60 percent of the children killed in the conflict. But the country was able to use its position on the UN Human Rights Council to thwart an investigation into violations committed in Yemen.

Last week, the most recent effort to date of finding a diplomatic solution failed - ostensibly because Houthi rebels had rejected a UN proposal that had called for disarming the rebels without giving them a position of shared power in a future government.

The fact that they refused to sign an admission of defeat can hardly surprise anyone. This week, the Saudi-led coalition resumed its airstrikes, which had been put on hold temporarily during negotiations in Kuwait. Once again, it was mostly civilians who were killed.

On Tuesday, instead of putting pressure on Saudi Arabia, the US State Department approved the sale of more weapons and military vehicles to the country in a deal worth approximately 1 billion euros ($1.15 billion). The accompanying statement praised Saudi Arabia as a "leading contributor of political stability and economic progress in the Middle East" - that would be news to many Yemenis.

Opinion: Time for high-emitting Australians to vote for real climate action 5h ago

Opinion: Pitch invasions are pointless and dangerous — and not fan culture 20h ago