Opinion: Vladimir Putin has to escalate the situation in Ukraine in order to survive | Opinion | DW | 21.09.2022

Opinion: Vladimir Putin has to escalate the situation in Ukraine in order to survive 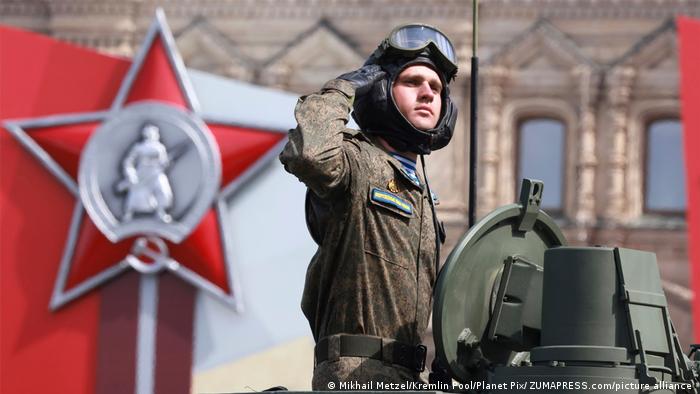 Putin has announced the mobilization of 300,000 reservists

There's no going back — if Russian President Vladimir Putin loses his war of aggression against Ukraine, it will cost him his power, perhaps more. The same is true for politicians in the government and in parliament who have linked their fates to the Kremlin chief, for better or for worse. They are panicking.

Given the Ukrainians' recent success in retaking their territory, Russia is looking at defeat, something no one in Moscow expected.

That's why Putin has now announced a partial mobilization and called up 300,000 reservists. They are supposed to stop the advance of the Ukrainians; an advance that bears witness to the desperate state of the Russian army.

On the sidelines of the Shanghai Cooperation Organization (SCO) summit in Uzbekistan just a few days ago, Putin, making an effort to appear dispassionate, said that Russia was in no hurry in Ukraine. But the world saw a weakened, isolated Putin. Television cameras showed an aging man, whom the other heads of state and government kept waiting. Seated on a couch, Putin listened politely to what they had to say.

Turkey, India and even China indicated publicly that they opposed Putin's war and supported Ukraine's territorial integrity. With good reason — the war is taking its toll on the global economy, which means it is restricting the power of the very politicians Putin had hoped would support his war of aggression.

Change of course in the Kremlin

There was no way that the situation could continue on this path, from the point of view of the Kremlin. Now that he is back in Moscow, Putin has rushed to change tack.

Ultimately, the partial mobilization is an admission of military weakness in eastern Ukraine. The announcement to allow Ukrainians in conquered territories to "vote" on whether they want to join the Russian Federation shows that they do not want to. Nobody in the world will take seriously the results of people voting at gunpoint, of a referendum in the ruins.

Putin wants to ensure that the conquered territories are absorbed into the Russian Federation. Then he will be able to call for the defense of the homeland, resorting to all military means possible. Thus, with a rhetorical flourish, a "special military operation" limited in time and space, which has so far had little impact on the everyday lives of most Russians, could be transformed into the defense of "Russian soil" by all means — including nuclear weapons.

End of the 'special operation'

There is no need to be a prophet to predict the imminent demise of the term "special military operation." It will be buried by Kremlin propaganda and replaced by even more of the confused lies, inventions and threats that the state-controlled TV stations use to try to indoctrinate their viewers. They already claim that Russia is not waging war against Ukraine but is defending itself in Ukraine against the US and Britain. And those who want to believe that do so.

The world leaders currently meeting at the UN General Assembly in New York will take seriously Putin's renewed attempts to play with fire. But their policy toward Moscow will not change. Ukraine will continue to receive weapons, its army will continue to fight.

And the 300,000 Russian reservists? Most have never been to war and they are ill equipped. They are family men and will be torn from their everyday lives against their wishes.

In Ukraine, they will be called to defend Russia alongside convicted felons and Chechen mercenaries. It will not work out. They will see for themselves that Ukrainians do not want to part of Russia.

Tens of thousands of people will die so that Putin and his entourage can stay in power, so that they do not have to answer for the crimes they have committed against their own people. That is the tragedy of the Kremlin chief's most recent bad decision.

Germany: Eurowings pilots to go on strike on Thursday 11m ago