There has been uproar in Germany over comments by a Cologne imam about the New Year's Eve assaults. It's still unsure what he meant to say, but the issue highlights a basic problem within Islam, says Kersten Knipp. 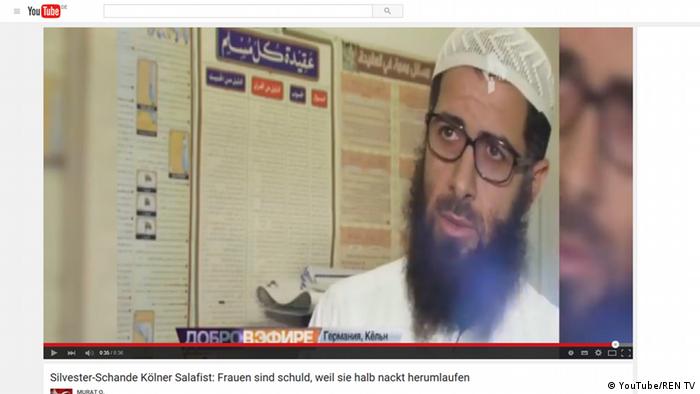 Whether The Cologne imam Sami Abu-Yusuf has made himself infamous in Germany intentionally or through the negligence of others is still unclear. He, in any case, feels that he has been misunderstood and, above all, misquoted.

He attracted attention after speaking to the Russian broadcaster REN TV about the violent acts that took place in Cologne on New Year's Eve. Hundreds of women were molested, sexually abused and robbed by young men from North Africa and the Arab world. "If they [the young women - ed.] run around half-naked and wear perfume, it's not surprising things like this happen." This, according to research by DW, was how REN TV translated Sami Abu-Yusuf's comments into Russian.

Abu-Yusuf feels that this translation has led people to misunderstand him. He was trying to say something else, he explained to the Cologne newspaper "Express": "There were scantily-dressed women, and they were wearing perfume as they walked through the drunken crowd. For some North African men, that was a reason to grope the women. That doesn't mean, though, that I think women are not allowed to dress like that. Everyone must accept this. And if a person doesn't like that, he must go elsewhere, to another country."

Volker Beck of the Green Party, who represents Cologne in the German parliament, lodged an official complaint, and the police are now investigating to find out whether this, in this form, was also what Abu-Yusuf said to the Russian broadcaster.

Since the assaults on New Year's Eve, some German media are inclined to blame Islam for the attacks on young women. They are not altogether wrong. And Islam also plays a role in this: not because it is based on an inherently sexist philosophy, but because it has a lack of hierarchical structure.

To put it plainly: The vast majority of Muslims abhor what happened on New Year's Eve. Nonetheless, the problem remains that the attacks have not been condemned at the highest level within Islam - nor can they be.

Perverted interpretation of the religion

As long as Sunnis in particular have no figure of authority comparable to the Catholic pope, and no interpretation of Islam that is binding for all believers, there will be an uncontrolled proliferation of theological interpretation.

A look at Saudi Arabia, which sees itself as the leading power in the Sunni world, shows where this leads. Here, the religious scholar Muhammad Salih Al-Munajjid runs a Salafist website. Among sites of this kind, it is in the top ten in terms of the number of hits. Al-Munajjid was recently asked by a user whether it was permissible for married Muslims to have sex with so-called "slave girls" - a euphemistic and cynical way of referring to Asian women who work in Saudi Arabia as housemaids. The religious scholar's response: Yes, of course, no doubt about it.

This kind of perverted theology of sex is also part of the contract for the terrorist organization calling itself "Islamic State." It permits its followers to rape women without fear of punishment: Christian and Yazidi women, and other captives, too. "IS" members claim that they do this with Allah's blessing.

Of course, there are also cynical ideologies within other religions that misuse their respective holy scriptures to justify their crimes. In Uganda, the butcher Joseph Kony and his brutal Lord's Resistance Army wanted to establish a theocracy based on the Christian religion. And in Chile, Paul Schäfer, who had previously worked in a children's home in Germany, promised his followers in the settlement of Colonia Dignidad an "authentically Christian life in the Promised Land." For him, regular sexual violence against women and children was a natural part of that.

Back to "IS." The vast majority of Muslims are revolted by them. Many imams have condemned their actions. But the fact that Islam, and Sunni Islam in particular, has no highest doctrinal authority whose word is law for all believers leaves room for any number of interpretations.

The flipside of 'tolerating ambiguity'

This is the flipside of the practice currently lauded in German Islamic scholarship as "the tolerance of ambiguity." The great freedom of interpretation enjoyed by even the most questionable imams can also lead down some very dark roads. This is why a large section of the German public is very worried.

It may be that Sami Abu-Yusuf was wrongly translated: that his intention was not to legitimize the events of that night, but only to help people try and understand the dynamics of what happened. This is why it's a good thing that the police are now investigating. Germany owes its Muslims clarification far beyond the specific case of what happened in Cologne. Above all, though, it owes this clarification to its identity as a constitutional state. It does not tolerate hate preachers who hide behind a mask of piety.