Opinion: Stop Talking Balls and Get on With it | News and current affairs from Germany and around the world | DW | 19.06.2006

Opinion: Stop Talking Balls and Get on With it

For a striker there is no better feeling: seeing that beautifully struck shot fly in. With a ball designed to enhance these possibilities, goal scorers are having a field day. The goalies, however, are far from happy. 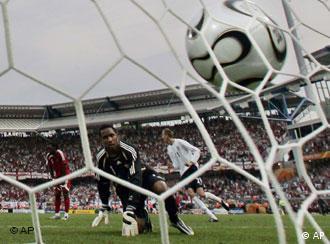 Teamgeist claims another victim: "It's like trying to catch a beach ball in a Force 10 gale"

Everybody's talking balls at this World Cup. And while it may, at first glance, seem a crude description of the asinine comments spouted by so-called soccer experts which fill the airwaves and column inches, it's actually a literal statement. Balls. Soccer balls. The adidas Teamgeist ball to be specific. Everyone's talking about it. And not all in glowing terms.

Before the World Cup, a fair few former players-turned pundits had dug out their crystal orbs and peered into the future: the 2006 World Cup would be the score-line equivalent of the Gobi desert, they decreed. This tournament, more than any other, would see a goal drought of biblical proportions. Defenses were too tight, they said. Teams prepare so meticulously, they said.

Obviously knowing better than anyone else, these sages ignored the reams of marketing hype that adidas were churning out about their World Cup ball. According to its maker, the Teamgeist was rounder than ever before with only 14 panels and fewer seams and had a surface smoother than conventional balls with a 26 or 32 panel hexagon-based pattern.

This revolutionary ball is apparently, in aerodynamic terms, closer to a baseball and when hit with a slow spin, it becomes less stable giving it a more unpredictable trajectory in flight.

Which is why players like Philipp Lahm, Torsten Frings, Kaka, Tomas Rosicky and Steven Gerrard were left beaming after spectacular strikes and goalkeepers like Kasey Keller, Shaka Hislop and Jose Porras were left cursing the advances of technology as they picked the ball out of the net. 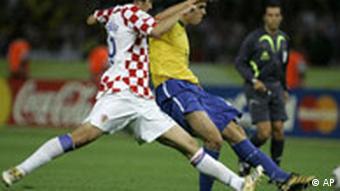 We have lift off: Kaka and Teamgeist combine perfectly

The group stage goal avalanche has left espousers of the Drought Theory speechless. And while not all of the goals have come from long range efforts, the ball itself has been credited with making the 2006 World Cup one of the most exciting in recent memory in terms of scoring.

A ball designed for attackers, excitement and goals

Without reinforcing the sales pitch, the reality is that the ball is made for action and excitement. "With long shots, it floats and moves a lot which makes it difficult to read," said Brazilian superstar Ronaldinho. "It's perfect for attackers."

"It does move a lot,'' England's Frank Lampard said after his team's 1-0 win against Paraguay in Frankfurt on June 10."I like it because I like to shoot and it gives the goalie trouble.''

"It goes where you want it to go,'' England captain David Beckham added. "Your passing, controlling and shooting of the ball is in one direction and that is what you need.''

While strikers lick their lips at the prospect of whacking the ball goalwards and audiences are left marveling thunderous wonder-strikes, the goalkeepers aren't happy.

Teamgeist: the scourge of the modern goalkeeper?

"Something is obviously going on with the ball," says USA's Kasey Keller, who was the victim of the curling terror unleashed by the Czech Republic's Rosicky on June 12. "It's a very light ball. The difference is only a fraction of a second but it's a big difference. This ball has a wobble. It's not an easy ball to catch." 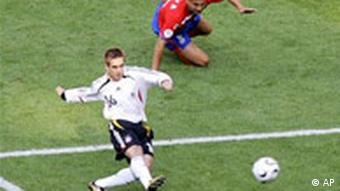 "At the last World Cup there were hardly any spectacular long-range goals,'' Keller added. "We had two in the first game so something is obviously going on."

Jens Lehmann had his first experience with the ball at the German national team training camp in Geneva before the tournament began. He didn't like it either. "When it rains, it's going to be very uncomfortable for us," Lehmann said. "It gets very slippery and flutters in the air."

England's Paul Robinson, who has yet to be caught out by the Teamgeist, is still far from being a fan. "It's two pieces glued together. It moves a lot. It's light like a volleyball, and when it's wet it's even worse," he said.

So, with players from front to back divided over the advantages and disadvantages of the ball, is it actually a good thing for the World Cup to have a ball which is as unpredictable as a beach ball in a Force 10 gale?

Designer and company defend their creation

"It's been used in the Bundesliga and the Champions League and no one criticized it then," adidas spokesman Emmanuelle Gaye said. "FIFA asked for a ball which would favor a good game as well as goals. The ball is rounder and smoother. It conforms to all regulations."

"If there had been a problem for a tournament as important as the World Cup, FIFA would have immediately come back to us. We are not worried. On the contrary, it's a World Cup with a lot of goals." 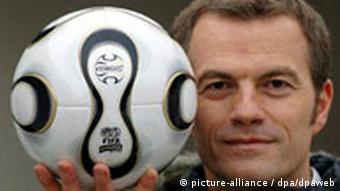 Hans-Peter Nürnberg and his creation

Hans-Peter Nürnberg, the man who created the ball, also dismissed claims that it is designed to give keepers nightmares. "In our high-tech football laboratory, Teamgeist proved three times better in trajectory and precision than other footballs used in top-level competition," he said in a recent interview with the Sydney Morning Herald.

"This ball is designed to give players unrivalled accuracy. Of course, it has a spectacular action and we would like strikers to take more risks and go for goal from every possible position," said Nürnberg. "But there is nothing in it to make anticipation difficult for goalkeepers."

While a company man and the ball's inventor may not be the most subjective people to ask, the Teamgeist has definitely opened up games which, as the Drought Theory doomsayers would have us believe, would have ended boringly goalless.

Goalkeepers have two jobs. The first is to stop people scoring and the second is to complain about something when they fail to do the first. Considering that it's only the goalkeepers moaning about the Teamgeist, maybe everyone else should just get on with it, enjoy the action and stop talking balls.

Not content with being rounder than any other soccer ball ever created, the Teamgeist Berlin -- the official ball of the World Cup final -- will also be golden. (April 19, 2006)