German sports giant Adidas is using its dominance in the soccer gear business during the upcoming World Cup to kit out the German national team as well as five others. And that's not where its magic marketing arm ends. 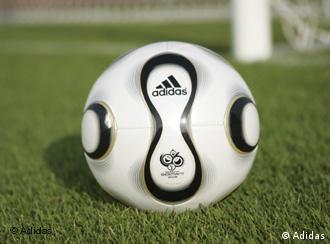 Adidas' involvement with soccer dates back to the legendary 1954 World Cup when the German national team jogged out on the pitch with soccer shoes sporting the characteristic three-stripe logo. Adidas founder Adolf Dassler is said to have personally screwed on the spikes under the shoes for captain Fritz Walter and his team, who went on to beat Hungary and clinch Germany's first World Cup title.

Ever since that memorable victory, the sports equipment maker from the town of Herzogenaurach has been the German national soccer team's partner and now also that of world soccer body FIFA as well as of European soccer association UEFA. 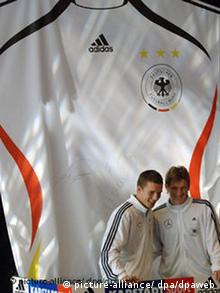 The World Cup in June will be no different: in addition to the German team, five other national teams will be running around in Adidas shoes and T-shirts. The sports giant will also outfit all the referees, linesmen, assistants and hostesses at the event. Even the official ball, called "Teamgeist," or "team spirit," is an Adidas product.

After all, team spirit is the most essential quality a squad should have to become world champion, said Adidas spokesman Oliver Brüggen. A total of 2,650 balls will be produced exclusively for the 64 World Cup games.

Adidas made in Asia 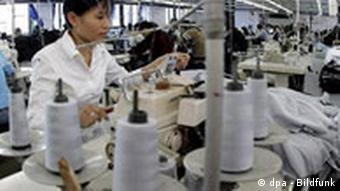 An Adidas factory in Suzhou, China

The German sports heavyweight closed all its home factories over a decade ago and has now completely moved production to low-cost Asian countries, such as China, India, Indonesia, Vietnam, Thailand and South Korea.

The same goes for the World Cup ball. Though "Teamgeist" was conceived in Germany, its valve and rubber pump come from India, the inner cotton sheath from Vietnam, the artificial leather is made in South Korea, and the rubber sticker is produced in Thailand. The ball, which will be assembled in Thailand by a Japanese company, will be marketed and distributed all over the world.

In addition, the massive merchandising drive will pump out around one and a half million T-shirts such as those that the national teams will wear at the World Cup and sell nearly 300,000 jackets, pants and bags with the Adidas' stripes.

The advertising juggernaut underlines the fact that soccer isn't just a game for Adidas, but big business. Brüggen said the sports equipment-maker was gunning for a turnover of over a billion euros ($1.2 billion) with soccer products alone in the year 2006.

Until now, revenue in that sector has been around 900 million euros. But Adidas reached a turnover of more than six billion euros last year with its sports equipment and fashion line. 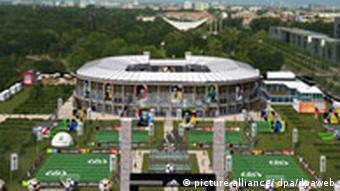 During the World Cup, Adidas' link with soccer will extend beyond the ritual kitting out of the teams. This time the sports giant will also sponsor a World Cup arena -- a miniature version of Berlin's Olympia Stadium -- which will hold up to 10,000 people and is being built on a prime site between the German parliament and the Chancellery in the capital.

"We're not just going to broadcast all the games live to create an authentic stadium experience, but we're also planning to stage concerts there with James Blunt and the Black Eyed Peas, for instance," said Brüggen.

The provisional stadium will be surrounded by amateur soccer pitches, restaurants and -- naturally -- Adidas shops. The savvy marketing campaign will cost Adidas some 20 million euros.

Thus thee company's marketing strategists have already ensured that business is booming even before the World Cup kicks off.

"When the first ball rolls on the field on June 9, we're going to say: The World Cup was successful for Adidas," said Brüggen.

The northern Bavarian town of Herzogenaurach is probably best known as the headquarter of sports brands Adidas and Puma, but there's much more to explore. (March 4, 2006)

Soccer Coming Back to the Reichstag

The World Cup soccer final in Berlin will certainly be the hottest ticket in town this summer. Now, a soccer park is to be built in front of parliament for fans to watch and play the beautiful game during the event. (March 25, 2006)