The northern Bavarian town of Herzogenaurach is probably best known as the headquarter of sports brands Adidas and Puma, but there's much more to explore. 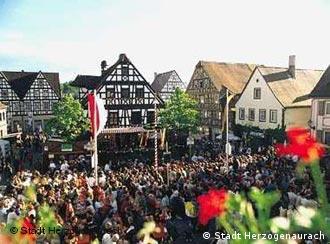 Herzogenaurachers like to celebrate in their historic market square

Founded during the 13th century, the idyllic town of Herzogenaurach is located in central Franconia, Bavaria and now counts approximately 25,000 residents.

Herzogenaurach is a place which should definitely be visited by anybody coming to Germany. Its historical background routes far beyond the establishment of the Adidas and Puma headquarters. Even the Argentinean national team has chosen to stay at a hotel in Herzogenaurach during this year's soccer World Cup due to the town's characteristics and originalities.

During the 13th centurym, a castle was built in Herzogenaurach. It was destroyed during the Thirty Years' War (1618 - 1648). In 1720 however, Bishop Lothar Franz had the castle rebuilt in Baroque style. It is now accessible for tourists.

From the castle, it's an easy walk to the market place. The fountain in the middle of it guarantees a medieval atmosphere without the absence of modern day surroundings such as shops or restaurants.

Not far from there is the main road that's lined with two towers. Once part of the inner-city walls they are now the town's landmark. Over the centuries, the eastern tower was used for multiple purposes, such as to store the city's money or as the town's prison. Until World War II it was used as the town's museum.

Today the museum is only a few meters away from the eastern tower. During the 1990s the building was completely restored as it used to be a nursing home. It is now a popular place which is constantly visited by tourists and locals.

Probably the most exciting sight in Herzogenaurach is the St. Maria Magdalena parish church. Archaeologists found the fundaments of a preceding Roman building beneath it. Enthusiasts of Roman history and architecture will find this very interesting.

The church should also be of interest to others as it was restored in Baroque style in order to fit with the whole town's general atmosphere. Part of the restoration was the huge barrel-vault which spans the nave and is the most powerful in Franconia.

There might be a lot of further churches and sights in Herzogenaurach, but that's not all: Herzogenaurachers are a joyful community who love to celebrate. From June 16 until June 18, the annual Old Town Festival, the Altstadtfest, is celebrated. During these days there is a stage at the palace garden where local music bands play folk music.

On July 29 and July 30, people dress up in Medieval-style clothes in line with the theme of the actual festival, the Medieval spectacle (Mittelalterspectaculum).

Germany will be flooded with soccer stars this summer, but as World Cup tickets start selling out, lurking outside the hotel could be the best way to catch the game's biggest names. DW-WORLD knows where to find them. (Jan. 21, 2006)

The European Commission has approved the 3.1-billion-euro ($3.8-billion) takeover of US giant Reebok by its German rival Adidas to create the second biggest sports goods firm in the world. (Jan. 25, 2006)