Opinion: No future for nationalism

The Bundestag has marked the 100th anniversary of the beginning of the World War I. Keynote speeches in Germany's parliament stressed that nationalism has no prospects, writes DW's Martin Muno. 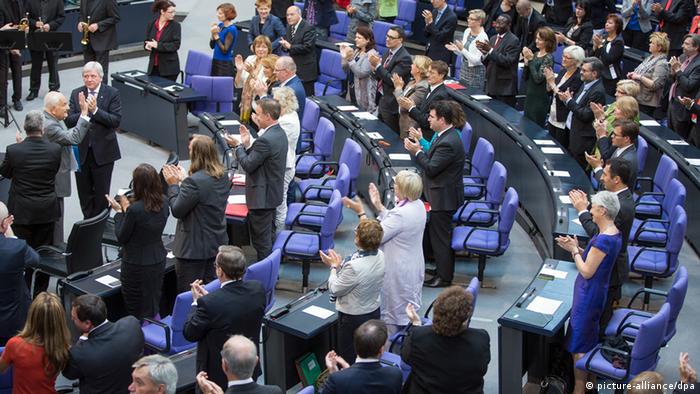 A commemoration in the German Bundestag marking the start of the World War I wasn't just about remembering the 17 million people who were killed, and innumerable others who were maimed and injured. It was also about a question posed by the president of the German parliament, Norbert Lammert: "What does the First World War have to do with us?"

It's more than just commemorating unfathomable suffering or remembering the delusion of the then-powerful who blundered into the "great seminal catastrophe of the 20th century." It's also more than acknowledging that World War I was the conflict that marked the beginning of an industrial apocalypse - leading up to dropping the nuclear bomb on Hiroshima and Nagasaki as well as the calculated killing of 6 million Jews in concentration camps.

It's about learning all over the world that nationalism has no prospects - and hasn't had any for a long time. German-French publicist Alfred Grosser, who delivered the keynote speech in the German Parliament, said it in a nutshell: "The utter defeat in 1945 generated a different kind of Germany. The federal republic has not been built on a nation, rather on a political ethic."

This concept has been dubbed "constitutional patriotism" by German sociologist and philosopher Jürgen Habermas.

Wherever nationalism flourishes, war is not far: Be it the Balkan wars in the 1990s or today in the South China Sea; or in the crisis involving Russia and Ukraine. And here is the lesson learned: Those determined to advocate against nationalism have to contribute to conflict resolution. That's what Lammert meant when he said "Germany is responsible for seeking peaceful conflict solutions." Accompanied by a sense of proportion and restraint, of course.

It's obvious that supranational institutions are required for conflict resolution. Former German Chancellor Helmut Kohl had repeatedly stressed that European unity wasn't just an economic project, but also a question of war and peace. It goes to show that this lesson has been learned when - at the end of the commemoration hour - it was the European and not the German anthem that sounded in the Bundestag.

These days, nations don't fight it out on the battlefield - but rather, on the soccer field.

When it comes to World War I, Serbia sees itself as both a victor and a victim - but not as a culprit. The country considers any blame placed on it to be a distortion of facts. DW takes a look. (28.06.2014)