Facebook is now Meta, but the name change won't resolve the company's many problems. Until Mark Zuckerberg addresses those, his lofty ambitions will remain barely credible, writes DW's Martin Muno. 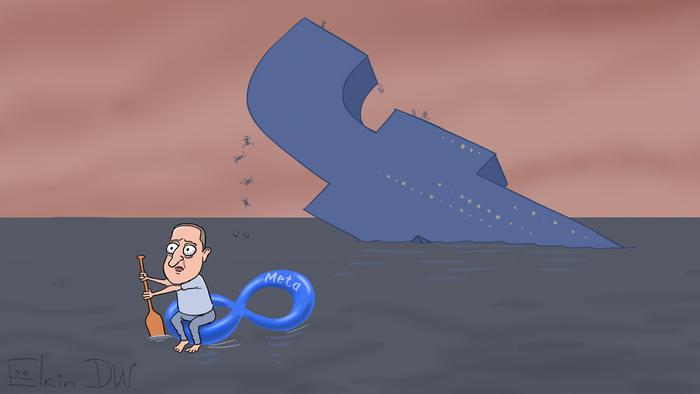 A different name won't save the sinking ship

You have to hand it to Mark Zuckerberg: He certainly doesn't shy away from embarrassing himself — witness his cringeworthy video announcement to rebrand Facebook as Meta.

The name refers to the term "metaverse," a vision of a future Internet in which users immerse themselves in a virtual, three-dimensional world with the help of digital glasses or contact lenses; in other words, compared to today's network, it's like pitting a Formula 1 car against a VW Beetle.

The video also shows how a Zuckerberg avatar meets up with employees and a cute robot in space to play cards.

The thing is, the concept is really not that cutting edge at all. The term was coined almost 30 years ago in the science fiction novel Snow Crash by Neal Stephenson.

In 2003, there was a first version for everyone: it was called Second Life and even Mercedes used it until the hype ended as abruptly as it began five years later.

The widespread use of VR (virtual reality) and AR (augmented reality) has been touted as the "new big thing" for years but has yet to catch on. Indeed, that virtual living room with a Pacific view and NFT on the wall will likely remain an unfulfilled high-tech wet dream of nerds for some time to come — even if computers these days can display those "realities" reasonably smoothly.

If we're being kind, Zuckerberg's show could be considered an ambitious vision if it wasn't for the fact that the company currently has enough problems on its hands that neither a new name nor virtual reality can solve.

For weeks, media outlets have been publishing internal documents under the name "Facebook Papers," many of which originated with former company employee-turned-whistleblower Frances Haugen.

These documents reveal a world that has nothing whatsoever to do with Zuckerberg's cozy visions. Instead, they focus on a ruthless corporate culture where the pursuit of power and profit takes precedence over the well-being of users and employees. They also show that the company's top management all too often ignores the concerns expressed by its employees.

Facebook does far too little to curb hate speech and conspiracy narratives. In many non-English-speaking countries, control is so lax that even drug cartels hire hit men via the platform.

Moreover, as an internal study shows, manipulated images in which female beauty attributes are aggressively displayed on Instagram often lead to psychological disorders in adolescent women.

These accusations and the corporation's dominant market position, with nearly 3 billion Facebook users worldwide alone, have reignited discussions about breaking it up.

Zuckerberg's calculation is that the overall corporation will garner a better image if Facebook is just a part of the whole. Its competitor, Google, showed the way: the search engine operator renamed its holding company Alphabet in 2015.

Zuckerberg is simply attempting to pull the wool over people's eyes. His promise to "connect people with each other" should be treated with the utmost suspicion in view of the numerous scandals that have dogged Facebook and continue to do so.

First and foremost, Zuckerberg needs to address his company's homemade problems. Until that happens, his lofty ambitions for a digital future remain barely credible. Against this backdrop, his science-fiction-like appearance is nothing more than whistling in the dark.

This piece was translated from the original German.