Opinion: IS bride sentence an important sign to Yazidis

The Munich trial of a German IS bride wasn't just about the death of an enslaved 5-year-old Yazidi girl in Iraq. It was about justice for genocide, says Matthias von Hein. 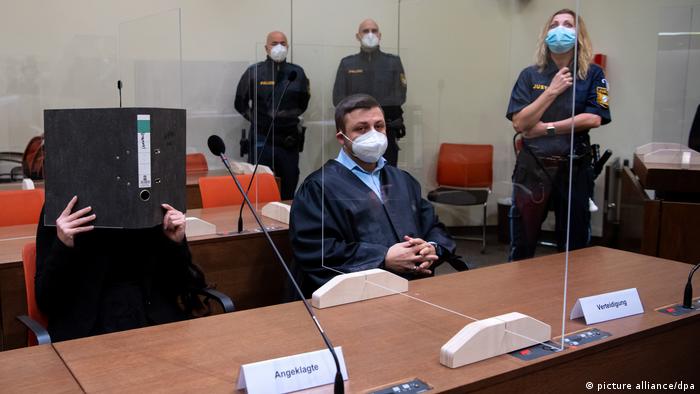 Jennifer W. hid her face in the courtroom when photographers were present

Is this the justice Yazidis were hoping for? The Higher Regional Court of Munich found a workable compromise between individual guilt and collective trauma when it sentenced Jennifer W. to 10 years in prison on Monday, ending a trial that gained worldwide attention. It was the first time that a member of the so-called "Islamic State" (IS) terrorist militia had been charged with crimes against international law in connection with the genocide of Yazidis.

Using religion as a front, IS fascists denounced minority Yazidi living in northern Iraq as "devil worshippers," declaring them subhuman. Thousands of Yazidis have been killed, abducted and displaced. The 23-year-old Islamist Jennifer W. from the town of Lohne in northern Germany could have, indeed must have, been aware of this when she headed off to the terrorist caliphate to marry an IS fighter.

Jennifer W.'s case combines the various horrors to which the persecuted Yazidi minority were subjected by IS jihadis beginning in the summer of 2014: a Yazidi mother and her 5-year-old daughter are abducted and enslaved, ending up in the hands of an Iraqi IS supporter who wanted to give his new German bride a house slave. Yazidi lives are worth so little to IS that the man chained the 5-year-old girl in the house courtyard in the scorching sun to punish her for a triviality — leaving her there to die

The Munich trial lasted 2 1/2 years. During that time, the court debated the fundamental question of whether the young Islamist woman from Lower Saxony was really as powerless to stand up to her husband as she claimed she was on that fateful day in August 2015, or whether she had become a murderer in Fallujah.

After hearing agonizing testimony, and listening to experts and police officers, the court handed down a moderate verdict. The court considered it proven that Jennifer W. stood idly by and watched the drama unfold, even though she could have intervened, making the 30-year-old guilty of "enslavement resulting in death." In justifying its sentence, the court said her husband was the driving force. The 10-year sentence is well below the prosecution's demands for life imprisonment.

At the same time, the court emphasized that by joining IS, Jennifer W. had supported the "destruction of the Yazidi religion" and the "enslavement of the Yazidi people." The verdict specifically recognizes the genocide of Yazidis — an important signal to the Yazidi community, which has been waiting for years for perpetrators to be prosecuted and brought to justice.

Systematic appraisal a long way off

The trial of Jennifer W. shows that, as important as it is that German courts attempt to come to terms with the horrific crimes, it is also exceedingly difficult. Obtaining evidence in Iraq or Syria, summoning witnesses, visiting sites where these alleged crimes occurred — is all difficult to say the least, often impossible.

At the end of the day, nothing can replace a systematic on-site investigation into the genocide. At best, this seems a long way off. At this point, thousands of traumatized Yazidis remain stranded in refugee camps in northern Iraq — and in light of the abysmal security situation in their ancestral region in the Sinjar Mountains, they do not dare return home.