New myths will be needed to convince Europe's masses of the desirability of mass migration - and to abandon their nation-states for a multicultural ideology. But restrictions may be needed, DW's Kersten Knipp writes. 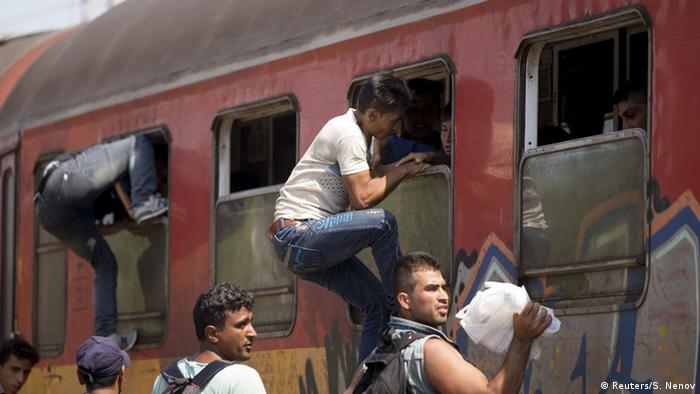 If you want to bring together people who do not know each other or have nothing to do with each other, you must come up with something. After all, most people want to live in manageable groups. The family, the village, the province: Anything that goes beyond this is pretty remote for them.

That's something German politicians in the second half of the 19th century had to learn as they set out to unite the German principalities into a single country, the German Reich. Most of their countrymen, they discovered, had little understanding of the idea of ​​a united Germany.

But there was a desire for this unity. And the poets also did their duty. They created uplifting verses and stanzas intended to give the people a feeling for the new German unity. August Heinrich Hoffmann von Fallersleben in 1841 wrote the "Song of the Germans," whose third verse is the text of the German national anthem to this day.

Authors like Achim von Arnim and Clemens Brentano created catchy and evocative Lieder, or folk songs. And all-German events like the Frankfurt Marksmen's Festival of 1862 reminded the visitors of their real purpose: "We want to be a single nation of brothers" stood in giant letters over the entrance.

Modern historians have referred to such a smorgasbord of poems, songs and short stories as "invented traditions." Traditions that - contrary to the general belief - do not go back to the depths of time, but are purely artistic creations designed to anchor the young nation-states in the hearts of men.

The project was a success: The people were all of a sudden French, Italians, Poles, Romanians or Germans. For more than 150 years they have sung their songs and waved their flags. And for the past few decades they have cheered on their national teams at European championships and World Cups.

Europeans have thus developed longstanding emotional ties with their nation-states. The European elites may long have imagined themselves citizens of a globalized world. But all the others still define themselves primarily through their country. Only then comes Europe, and after that the world.

What we are currently experiencing, however, is an unprecedented challenge to these habits. Kos, Ceuta, Lampedusa: Every day we see migration that will change the European nation-states in a fundamental way - and thus also the circumstances in which generations of Europeans have quite naturally lived, and still live.

Of course, there has always been migration. Migration is a characteristic of developed societies. But so far it has occurred on a much smaller scale. The expulsions and resettlements after the Second World War were an exception. But they happened within Europe, in a culturally more or less homogeneous area.

But now people are coming in much greater numbers and from vastly different parts of the world. They have sometimes very different experiences, cultures and beliefs in their baggage. And past experience - for example, the discussions on Muslim headscarves, objections to mixed-sex physical education, and ritual slaughter - have shown that these cannot easily be reconciled with European traditions.

The fears, concerns, and partly also the resentment that many Europeans feel as they see the current waves of migrants should come as no surprise. But we should be careful not to condemn them flatly as xenophobia or racism. Of course there is xenophobia and racism. But not every hesitation, every defensive attitude must be a sign of a dark disposition.

A change to familiar circumstances, as is now occurring with the mass migration to Europe from the Middle East and Africa, is no small thing either for the migrants or for the host societies.

But the phenomenon of "invented traditions" shows that future coexistence is quite possible. Again, poets and artists will be needed to provide a new understanding, a kind of founding myth, for the multicultural societies now emerging that will be sufficiently strong to bind together the different experiences.

The experience of the 19th century has shown that societies are highly flexible structures that can take very different forms. Only this does not happen overnight. And it cannot take on unlimited dimensions.

As ugly as this may seem: Immigration numbers must be limited. To call for this does not mean to preach racism - but an orderly transformation of Europe and its nation-states.

Macedonia has sent in the army to close its border with Greece after thousands of Middle Eastern migrants trying to enter the EU overwhelmed the country. That's not a solution, writes DW's Zoran Jordanovski. (22.08.2015)

Europe is expected to receive four times as many refugees as it did last year - numbers that haven’t been seen since the end of World War II. Time to review five simple truths, says DW’s Felix Steiner. (20.08.2015)

Syrian refugees are here to stay

Experts believe that the majority of the Syrian refugees in Turkey will be permanent. They warn against the danger of marginalization due to the deficiency in educational opportunities. (19.08.2015)