Germany will not be challenging to lift the European Championship trophy in 2020, and that's fine given the team's new development cycle. The current squad lacks in two key areas, writes DW's Jonathan Harding. 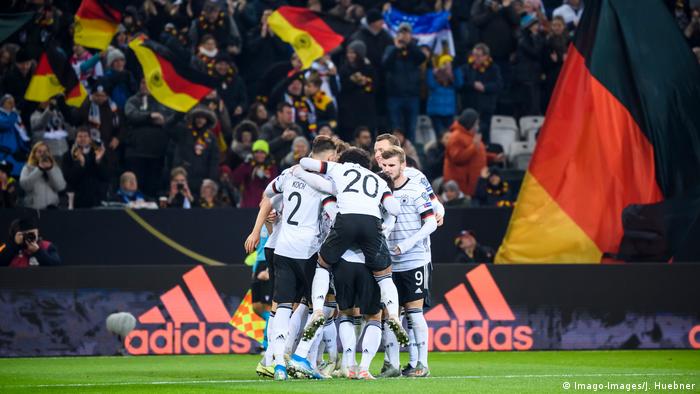 Germany might have finished top of their qualifying group and lost only once in 2019, but they are not going to challenge for the European championships next summer. Given that the team is in the first stages of a new cycle of development, this is exactly where Germany should be.

Both Joachim Löw and Germany have recovered somewhat from the debacle in Russia last year. Löw made changes to the faces in the squad and the style of play, and as the European Championship looms, it is clear this new Germany have taken that first step in their rebuild.

In Serge Gnabry, Germany (and Löw) finally have the explosive striker they have been looking for since Timo Werner failed to fill the role. The midfield quartet of Toni Kroos, Joshua Kimmich, Ilkay Gündogan and Leon Goretzka is beginning to gel, transitioning into different roles and taking up different positions throughout games. The decision to move Kimmich out of the right-back spot was bold given his excellence in the position, but, with every passing game, he is looking more accomplished as both a playmaker and a holding midfielder. While Kroos and Gündogan aren't going to be leading like Bastian Schweinsteiger, Goretzka's ability to score gives Germany a free-scoring midfielder for the first time since Michael Ballack.

Löw's attempt to get Germany playing more transitional football rather than the heavy, possession-based approach that cost them so dearly in Russia is gradually paying off. The recent swatting away of weaker opposition is important for team unity and pushes the wobbles from early in the year further from memory.

Nevertheless, the team's evolution remains in its early stages. Injuries have hampered Löw's ability to develop more than a core, and it takes time to get a new group playing a new style of football — especially after such a tumultuous 18 months. Add to that, Germany are short of any elite players in defense.

With Germany's best defender (Niklas Süle) likely out of the tournament due to injury andLöw refusing to acknowledge Mats Hummels' club form,  there is little stability or standout quality in the heart of the defense. Matthias Ginter has stepped up, but there are too many question marks about all the other options. Defensively, the major consolation is that Manuel Neuer has returned to form — well, returned for everyone but Marc-Andre ter Stegen, that is.

The Euros will serve as a key building block towards Germany's chances of challenging for the 2022 World Cup, when Löw — or whoever heads the national team then — will look to have a group of players at their peak. Until then, Germany are short of quality in defense and still developing their ability to play a new style of football. Individual talent could lead them to a surprise spot in the final, but a quarter or semifinal finish is more likely. And, in truth, that's fine. This is not a golden age of German football, nor is it the disappointment of last year. The foundation for this new team has been set. Now it's time to build.