The French president has fired the head of the army and has now started a row with the country's mayors. He is increasingly governing like an authoritarian. Macron will have to grow up fast, says Barbara Wesel. 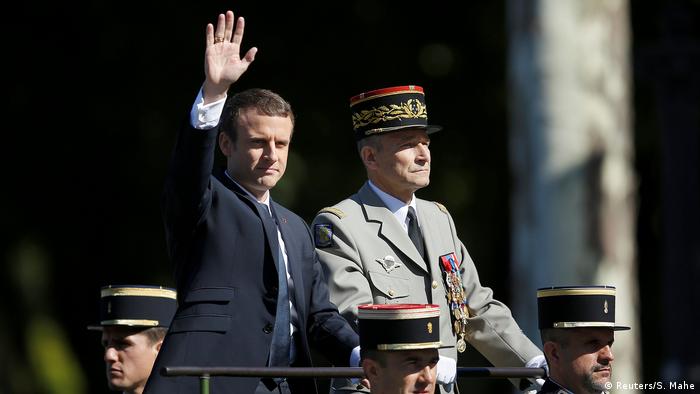 During the French presidential campaign, Emmanuel Macron said that he wanted to rule like Jupiter, the supreme god of the Roman pantheon - quite the opposite of his stuffy and bourgeois predecessor Francois Hollande. In outlining his style of governing, Macron claimed that the French wanted a regal, enraptured president that would give orders from on high. But now it seems that the youthful man in the Elysee Palace has overplayed his hand and is facing a stiff domestic headwind.

Solid performances on the international stage

In terms of foreign policy, the French president has exhibited a steady hand and an astonishing amount of dexterity. The French enjoyed watching him read Russian President Vladimir Putin the riot act after inviting him to Versailles amid royal pomp and ceremony. That won't make him best friends with Putin, but it was effective and extremely popular.

Macron has also shown confidence in dealing with Donald Trump: whether in a handshake among alpha males, a sightseeing program that included the Eiffel Tower or at the Bastille Day military parade - the Frenchman always came out looking like the victor. And the French people did not even seem to begrudge the fact that their president invited the vehemently detested US president to Paris for their national holiday. They accepted the invitation as a smart strategic move.

Macron has managed to make all the right moves in Europe as well. He has embraced Angela Merkel, admonished anti-democratic East Europeans and shown the British what a French-German axis looks like. So far, so good.

But now his euphoric honeymoon is over and the president seems to have come crashing down to earth in the face of domestic reality. Suddenly, he appears to have discovered something that has been clear for a long time - the fact that he will have to find billions in savings for the upcoming budget if he hopes to meet European debt limits. And that is something that is very important to Macron because he desperately wants to do business with Germany and to forge ahead with the closer interlinking of the Economic and Monetary Union. But to do so, he will have to prove that he can in fact lower government expenditures and push through reforms.

There is a domestic price to pay if either is to come to fruition. And the cost will increase the more Macron attempts to govern, as Jupiter, with the thunderbolt. Rather than conferring with the head of France's army, Macron told him that he would simply have to come up with 850,000 million euros ($992,000 million) in cuts. He then proceeded to publicly scold the general like a schoolboy when he protested. The general had no choice but to resign. It was very poor political style from the president, and even shocked many supporters within his En Marche party.

Reforms and budget cuts per decree

Mayors and district authorities who will be forced to make painful cuts over the next five years are appalled as well. Of course, most are well aware that France must do something drastic to rein in its runaway expenditures. But the president will not be well served by decreeing such cuts from on high without asking for input from others. The French will refuse to cooperate, if he chooses that route. Although they may appreciate a certain amount of regal posturing from their president, they have no desire to be treated like his subjects.

And all of this is taking place before the fight has even commenced with unions, or the right and left-wing parties. Parliamentary preparations for that battle will begin next week. Macron may have a sufficient parliamentary majority to advance his program, but he would be ill-advised to further inflame the wrath of the people if he intends to survive politically.

From august to absurd

Emmanuel Macron controls his public image in a way that has not been seen since Francois Mitterrand in the 1980s. He, too, was called "god" by the French. But times have changed since then, and the current president is very young. It is just a short step between being exalted and becoming ridiculous. And Macron is overdoing it. He has mistaken authority with authoritarianism, and gives the impression of being intoxicated by his own power.

Add to that the fact that his relationship with the press is only nominally democratic. Hollande talked too much, Macron doesn't talk at all. Both approaches are wrong. He let it be said that his thoughts are too subtle to discuss with journalists. That is immature and an open invitation for satire.

Emmanuel Macron must urgently grow up, drop his megalomania and find a path that will allow him to balance his monarchical behavior with the utterly normal and democratic exercise of power. Recently, it was discovered that the president's official portrait - which must be hung in all of the country's administrative buildings - is too big to fit into existing frames. That is of course a welcome present for every caricaturist in the land. And the man in the Elysee Palace is certainly clever enough to know that the surest way to lose one's authority is to be considered absurd.

Indonesia: Over a dozen killed as tour bus hits billboard 2h ago