Opinion: Donald Trump is not king

US President Donald Trump has lashed out against a federal judge over legal pushback against his travel ban. Though that is disturbing, the good news is that the system of checks and balances seems to be working. 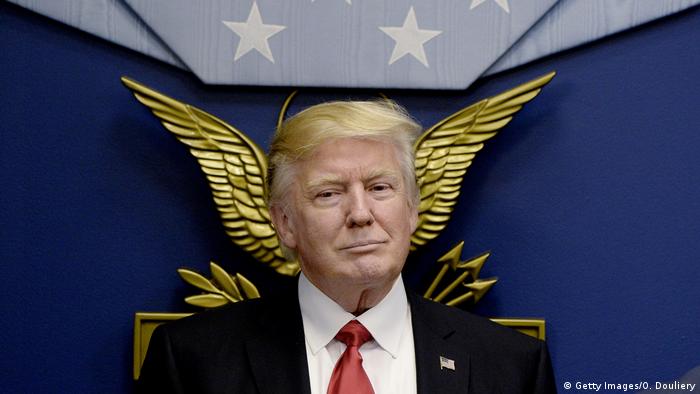 Donald Trump is learning the hard way that even the president of the most powerful country on earth cannot do whatever he wants by whatever means he deems fit.

Misgivings, rumblings and open opposition from government officials inside the National Park Service, the intelligence community, the State Department, the Justice Department and other agencies could have served as an early indicator for Trump that even the president of the United States is not omnipotent.

And though it is true that some of the officials involved were Democrats - and may therefore have had a partisan agenda - that is certainly not the case for all of them as the majority are accustomed to working for both Republican and Democratic administrations.

The early warning signs that even the president must follow the rules set forth by the US legal and political system might have been too subtle for a man without any previous governmental experience.

Maybe that's why Trump seemed stunned when courts in various states put the breaks on his shoddily prepared and hastily implemented travel ban. Making matters even worse for Trump, a federal court then rejected the executive order halting the travel ban on a national level.

The way things stand now, Trump's travel ban faces a protracted legal battle that may ultimately work its way up to the Supreme Court. That means it could take a long time until the matter is fully resolved.

To be clear, Trump's executive order could ultimately still be cleared by the courts, and as president he certainly has the power to issue travel restrictions. But the way this particular decree was designed - with its blanket ban for citizens of seven Muslim-majority countries, the legal reasoning given and its haphazard implementation which caused harm to many people already cleared for lawful entry to the United States - it seemed it almost begged for court challenges.

It is troubling that Trump took to Twitter to insult the man who ruled against reinstating his controversial travel ban - a federal judge nominated to the bench by Republican President George W. Bush - as a "so-called judge" and blamed him in advance for any possible terrorist attack.

Not only can Trump's statements be interpreted as a sign that the president of the United States is questioning the legal authority of a federal judge, but they could also be read as a sign that he might not fully appreciate the separation of powers codified in the constitution of the US.

Sure, Trump's harassing a federal judge does not come as a surprise: it's merely a continuation of what he did during the presidential campaign, when he questioned the impartiality of a federal judge because of his Mexican heritage.

That's why it was critical that US Vice President Mike Pence clarified that, notwithstanding Trump's statements, the federal government would comply with the judgments handed down by the courts, even if the administration is prepared to continue its legal fight.

The traditional system of checks and balances appears to be working and accepted by the new administration, and that is certainly welcome news - even if its chief protagonist may still find it difficult to accept the constraints its put on him.

Have something to say? You can leave a comment below. The thread automatically closes after 24 hours.

Canada: Bishops apologize for abuse of Indigenous children 5h ago

Huawei executive Meng leaves Canada after US deal 6h ago

Opinion: Angela Merkel has left the CDU in tatters 2h ago