A US judge has temporarily suspended Trump's executive order barring nationals from seven Muslim-majority nations. The White House called the move "outrageous," saying the order was "intended to protect the homeland." 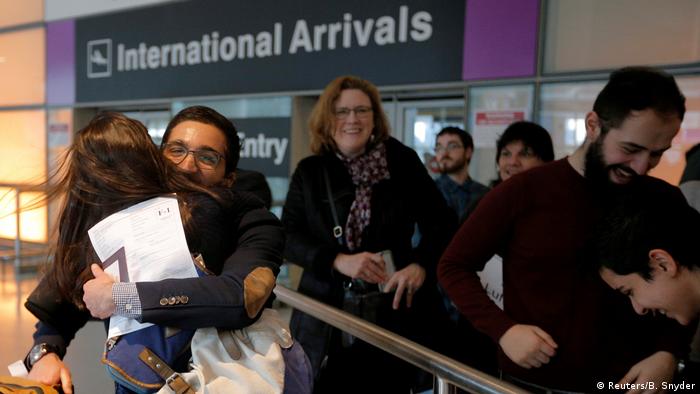 European leaders want the White House to clarify what the travel ban means for dual nationals and asylum seekers. They also question its value in fighting terrorism.

"The state has met its burden in demonstrating immediate and irreparable injury," Robart said.

Washington state Attorney General Bob Ferguson, who filed the lawsuit along with the state of Minnesota, argued that the executive order failed to provide due process for legal residents of the United States.

"The law is a powerful thing - it has the ability to hold everybody accountable to it, and that includes the president of the United States," Ferguson said during a press briefing after the ruling.

Friday's ruling also blocks the suspension of the US refugee program that has left thousands stranded after receiving approval for resettlment.

In reaction to the ruling, airlines including Qatar Airways and Air France said on Saturday that they will allow people barred by last week's executive order to board flights to the US if they have valid travel documents.

The US Customs and Border Protection agency told airlines to allow travelers affected by Trump's executive order to board, an aviation official said, according to Reuters news agency.

Hours after the ruling, White House spokesman Sean Spicer said the Justice Department "intends to file (for) an emergency stay of this outrageous order and defend the executive order of the president, which we believe is lawful and appropriate."

But the Justice Department later said it would not file for an emergency stay on Friday, according to a spokesperson.

"The president's order is intended to protect the homeland and he has the constitutional authority and responsibility to protect the American people," Spicer said.

Friday's ruling has raised questions concerning the legal future of the order. However, lawyers representing Trump's administration had filed an appeal on Thursday to block any attempt at a suspension of the order.

Although the case may make its way to the Supreme Court, the highest judicial body in the US, it would likely be after the initial 90-day duration set forth in the order.

Ordered last week, Trump's travel ban caused chaos across airports in the US and prompted mass protests both in the US and abroad.

The order prevented passport-holders from Iran, Iraq, Syria, Sudan, Somalia, Libya and Yemen from entering the country for 90 days and indefinitely suspended the US refugee program for Syrians, citing national security concerns.

However, some American lawyers argued that the order was unconstitutional because it deliberately targeted Muslims.

The US State Department on Friday announced that fewer than 60,000 people had their visas invalidated due to the executive order, a stark contrast to the 100,000-figure cited by US District Judge Leonie Brinkema in Virginia.

Brinkema had ordered the federal government to provide Virginia with a list by Thursday of "all persons who have been denied entry to or removed from the United States."

German Chancellor Angela Merkel earlier this week criticized the travel ban, saying it did not contribute to the fight against terrorism.

"The necessary and decisive battle against terrorism does not in any way justify putting groups of certain people under general suspicion, in this case people of Muslim belief or of a certain origin," she told reporters in Berlin.

Meanwhile, some US-based researchers have questioned why countries such as Saudi Arabia, Egypt and the United Arab Emirates have not been targeted by the ban, considered a necessity for national security by the White House.

US Entry Ban - The End of an Open World?