Leading experts on constitutional law are calling for a turnaround in the German government's refugee policy. Merkel should listen to them, says DW's Christoph Hasselbach. 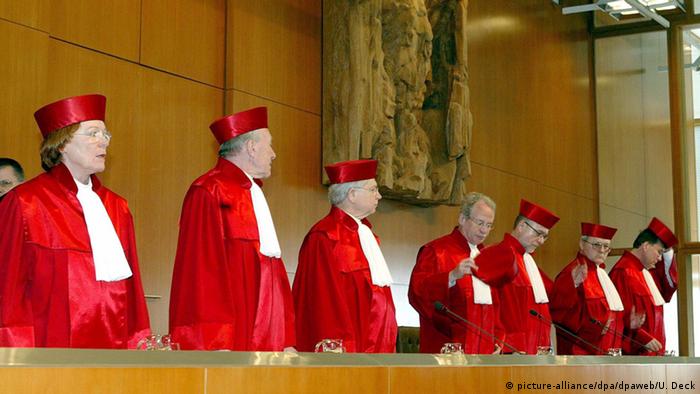 After the Cologne attacks, the German government is being inundated with suggestions on tightening the country's asylum laws. The emphasis is on laws that would make it easier to deport criminal asylum seekers. But critics keep pointing out how difficult such laws are to enforce, even when an asylum seeker has committed a crime, or after their application has been rejected.

But that's actually beside the point. The real issue is that the government is still keeping the door open for uncontrolled immigration. Around 3,000 people cross into Germany every day. We are in the middle of winter. Just imagine how many it will be when the Balkans route is warmer and the Mediterranean is calmer. And that's not even addressing the issue of family members coming to join refugees that have been granted asylum.

If it were just Syrian or Iraqi war refugees coming, and the authorities knew that without a doubt, it would be easier to understand the open-door policy. But many of the migrants arrive here with no passport, and pretend to be from Syria. Many instead come from Morocco, Algeria, Tunisia, Bangladesh, and Sri Lanka, to name just a few countries of origin. They are not the richest or most democratic countries, but even so, barely any of their citizens stand a chance at being granted asylum in Germany. Despite this, people who make it to Germany do have relatively good chances at permanent residency.

Chancellor Merkel said she wanted to significantly reduce the number of refugees. But Turkey hasn't lived up to its promise to stop refugees from traveling on to Europe, nor is there much reason to expect that other EU states will take on their share of the burden. And yet Merkel wants to keep the borders open.

How long should this continue, if not even the rest of Merkel's CDU party is willing to stand up to their leader? We can't expect opposition from the other parties in parliament: The SPD, the Greens and the Left Party are for even more liberal policies on refugees.

Maybe they'll listen to a group of renowned legal scholars who are experts on the German constitution. They've now spoken out in the sharpest of tones, warning that the state is under threat. The business daily Handelsblatt quoted the former president of the Federal Constitutional Court, Hans-Jürgen Papier, who spoke of a "blatant political failure." The constitutional state must not allow itself to become unhinged by political decisions, he said, adding that it has a duty to "stand up to threats that could result from permanent, unlimited, and uncontrolled migration."

Former constitutional justice Udo di Fabio wrote in an opinion piece published by the mass circulation Bild newspaper that the German constitution is not there to protect people from all over the world "via an actual or legal entry permit." The country is obligated to "reintroduce effective controls along national borders," he said.

And Michael Bertrams, a former president of the constitutional court in the state of North Rhine-Westphalia, accused Merkel, in a recent article in the Cologne Stadt-Anzeiger newspaper, of allowing hundreds of thousands of refugees into the country in a "self-aggrandizing act without parliamentary permission."

The Hamburg-based legal scholar Reinhard Merkel (no relation to the chancellor) pointed to a further aspect of the debate at the beginning of October. In an interview with DW, he said then that the point had already been reached either for "new elections or a referendum on this issue." The German people, he said, had never been asked.

All of these arguments are straightforward. But until now, politicians, citizens and journalists who expressed such views have been labeled "right wing." Maybe now that they're coming from some of Germany's foremost legal experts, they'll carry more weight.

A Bavarian brings Chancellor Merkel a busload of refugees

In protest against Germany’s refugee policy, a local Bavarian administrator, Peter Dreier, has sent 31 refugees by bus from his rural district to the chancellery in Berlin. Fabian von der Mark reports from Landshut. (14.01.2016)

Confusion reigns once again on Austria's border as hundreds of migrants seeking refuge in other countries are being rejected by Germany, which once welcomed them with open arms. Alison Langley reports from Schärding. (14.01.2016)

WHO calls on public to rename monkeypox 8h ago

Opinion: Kenya election degenerated into farce and acrimony 16h ago