Indigenous people in Colombia suffered greatly during years of armed conflict between the government and the Revolutionary Armed Forces of Colombia. But since last year's peace agreement, some things have gotten worse. 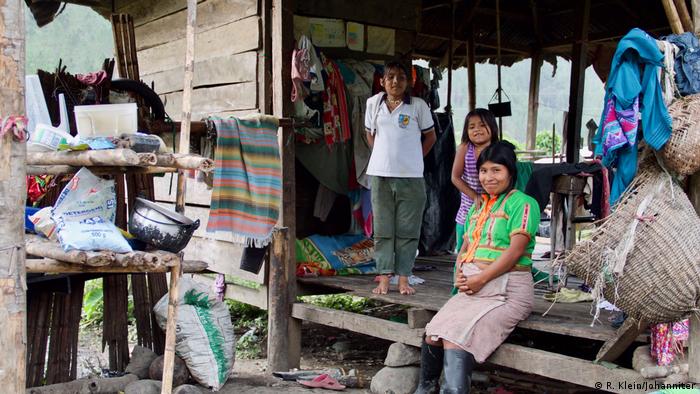 In the small village of Frontino, a four-hour drive from the Colombian city of Medellin, a dozen wooden huts stand alone, surrounded by sugarcane fields and green hillsides. Some 200 people live here, three or four families to a house, alongside chickens, dogs and cats. The houses have no beds, nor do they have clean drinking water or toilets. The village is home to the tiny Embera Katio community, one of Colombia's indigenous groups.

Years ago, ten times as many people lived here. Then paramilitary groups arrived and began executing residents. "They threatened to kill more if we didn't leave. So we were forced to flee," says Felipe Bailerin. He recalls: "We left everything in our houses behind. We left our pigs, our cows and our horses. It all happened very quickly." 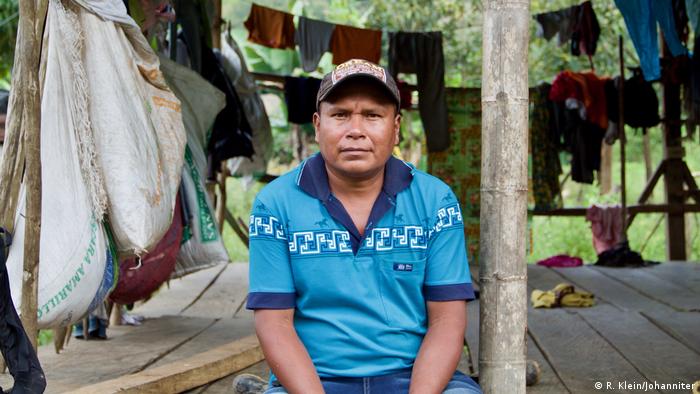 Felipe Bailerin said his village lost everything when paramilitary groups arrived. After returning, little was left.

Coming back to nothing

Those who fled were forced to live for years as internally displaced persons within Colombia. They were unable to return to their village until just a few years ago. Not much remained of their possessions, least of all their land. In the meantime massive amounts of sugarcane had been planted in their fields. The operator, a large corporation, now allows the indigenous residents to work on the company's plantation — for very low wages that are paid out irregularly. "We lost everything we had," says Felipe Bailerin.

Today Frontino's residents do not even have enough land to grow the corn or beans needed to feed themselves. Many children in the village are undernourished and suffer from diarrhea and other illnesses.

The fate suffered by Felipe Bailerin and the Embera Katio is by no means unique. About 3.4 percent of Colombia's citizens are "indigenas," people native to an area whose origins far predate the arrival of western Europeans. They, more than any, suffered greatly during the fifty years of armed conflict between the government, guerrillas, criminal gangs and paramilitary groups, and they were repeatedly driven from their land. 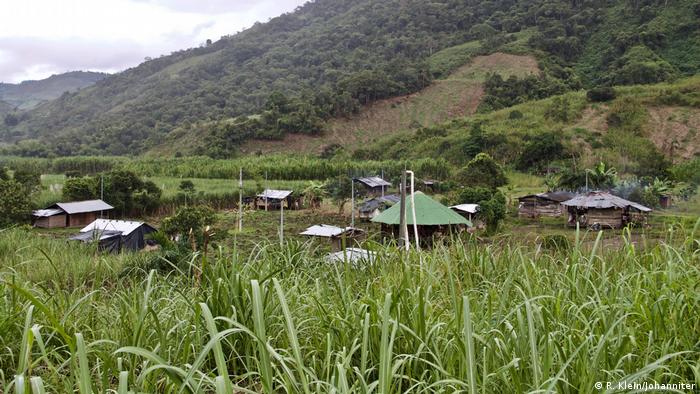 Rights on paper but not in practice

The reason: Indigenous peoples often live in remote parts of Colombia, in areas rich in natural resources that were highly sought after by all of the parties involved in the conflict. Their lands often sat atop coal or gas reserves or were extremely fertile, providing perfect conditions for growing coca, sugarcane or oil palms.

Although Colombia's government anchored the rights and territories of its indigenous groups — all of whom are closely bound to the country's nature — in its constitution, it rarely honors those rights in practice. "Their rights are being trampled upon," says Monika Lauer Perez, Colombia expert for the Latin American aid organization Adveniat that is based in Germany. "They do not have a voice and they have difficulty gaining access to justice."

That is the case with Felipe Bailerin and his fellow villagers. They would very much like to sue to regain their land, but that is expensive, and indigenous people often cannot produce deeds to their properties. 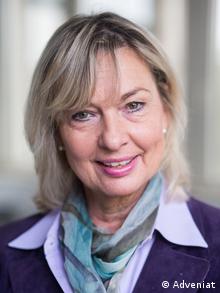 Lauer Perez works for the German Latin American aid organization Adveniat, which is based in Essen

The 'stabilizing force' of the FARC

The agreement reached by the Colombian government and Revolutionary Armed Forces (FARC) guerrillas last year was largely supported by most indigenous groups. They had hoped that it would be a step towards peace and a more just redistribution of land, which was part of the agreement. Yet new problems have arisen since the treaty went into effect.

"State authorities responsible for returning land often turn it over to large landowners and not to indigenous groups," says Lauer Perez. "One could say that the injustice continues — just without weapons."

Another problem is that with the retreat of the FARC, villagers also lost a certain amount of protection. Most indigenous communities did not want to have anything to do with the FARC, but the rebels were also not their biggest enemy. "You could usually come to some kind of agreement with FARC. You knew what they wanted, for instance, to plant coca. But they also respected indigenous peoples' relationship to the land, and they made sure that bigagroindustrial and mining companies didn't move in," says Lauer Perez. "Indigenous groups are very worried about how to deal with the new situation."

Ulrich Morenz, a Colombia expert advising the German-based NGO Society for Threatened Peoples (GfbV), agrees that the FARC, inspite of its guerilla activities, was nonetheless a stabilizing factor for indigenous peoples. When problems arise now, such groups often do not know who they can negotiate with, Morenz explains. "Disillusionment spread relatively quickly because people realized that other groups were taking FARC's place. And that has made the situation even more complicated at times."

New and established guerrilla groups, criminal gangs and paramilitary organizations have all sought to fill the void left by FARC since it laid down its arms. And these groups are now pushing into regions that FARC formerly held.

"The level of violence has generally gone down, but it appears as if there are more targeted killings," says Morenz. "Social activists as well as a number of indigenous people have been the victims of such murders." He adds: "These killings are disproportionately high in areas where FARC had been most active in the past."

Although the violence in Felipe Bailerin's village has also subsided, the fight for the land so important to the villagers' way of life has by no means ended. For, as the saying among them goes: "An indigena without land is no indigena."

The author traveled to Colombia as part of a research project financed by the German humanitarian organization Die Johanniter.