Former FARC commander to run for presidency in Colombia

Members of the now disbanded FARC have nominated ex-leader Rodrigo Londono, known as 'Timochenko,' to run for president in next year's election. Londono and other ex-rebels may face trials for human rights crimes. 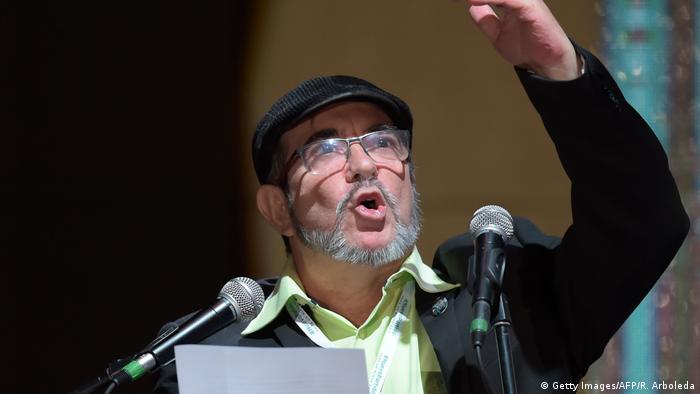 Colombia's demobilized guerilla movement FARC has said veteran leader Rodrigo Londono will be their candidate in the presidential election in 2018.

Londono, better known by his alias Timochenko, became the leader of the FARC rebels in 2011. He played a key role in the peace process to end more than five decades of war that killed at least 250,000 people.

Londono and President Juan Manuel Santos signed a peace deal last year in which rebels agreed to lay down their weapons and confess their war crimes.

"The common people and those who dream of a new country will have their representation," said Ivan Marquez, a former rebel leader who served as chief negotiator during talks with the government.

Londono suffered a stroke earlier this year and has received treatment in Cuba.

The Marxist FARC are now called the Revolutionary Alternative Common Force party, but still refer to themselves by the Spanish initials FARC.

FARC's new political party has said it is willing to form a coalition with other leftist parties. It's assured of at least 10 seats in the Congress by the peace accord, irrespective of election results.

"We manifest our willingness to hold talks with all social political groups and movements to make united lists," the FARC said in a statement.

A good showing by FARC in next year's election seems unlikely at present. Polls within Colombia show the FARC remains unpopular, with many Colombians still doubting FARC's commitment to peace.

Imelda Daza Cotes, who is FARC's candidate for vice president, said the party did not wish to change the nation's economic model but to improve it.

Londono and fellow former rebel fighters are likely to face trials for crimes like murder, kidnapping and rape. It remains unclear how they would serve in office if sentenced.

Special tribunals would hear the cases and could hand out sentences of up to eight years. Those convicted would not be sent to traditional jails but instead would be ordered to do reparations work like removing land mines.

Colombian guerrilla group the ELN and the country's armed forces have begun a ceasefire after five decades of violence. The truce is the result of ongoing peace talks with the government. (01.10.2017)

Colombia officially declares peace with FARC after handover of weapons

Colombia has declared its conflict with the Revolutionary Armed Forces of Colombia (FARC) officially over. The rebel group handed over the last of its weapons to be melted down under UN oversight. (16.08.2017)

My picture of the week | 'Make babies, not war!'