A hunger for yet more trophies has seen Bastian Schweinsteiger sign up for a further year in America's Major League Soccer. The German midfielder has extended his deal with Chicago Fire ahead of the 2018 season. 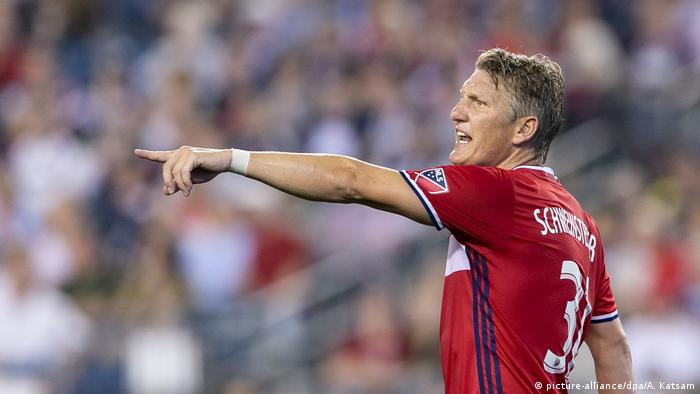 A move to America may be seen as a wind down to retirement for many European footballers but Bastian Schweinsteiger has insisted that he has unfinished business with Chicago Fire.

Despite a trophy-laden career with Bayern Munich and Germany that included a World Cup, a Champions League title and eight Bundesliga crowns, the 33-year-old has just inked a new deal to try and right the wrongs of his first year in Major League Soccer (MLS).

“I am very happy to re-sign with the Chicago Fire, and to continue what we started in 2017,” Schweinsteiger said. “Last year was a special moment for my career, but it felt incomplete without a trophy.

"But I am sure we can create another memorable season with the support of our great fans. I love this city, this sport, and winning, so I look forward to another season with the Fire as we progress to hopefully another level of success.”

Chicago Fire lost out to New York Red Bulls in the first knockout round of last season's MLS playoffs but Schweinsteiger enjoyed a decent campaign with a goal on his debut one of three he scored in 24 appearances. He also added six assists.

“It was a priority to re-sign Bastian and we’re pleased that he will remain with the club,” Fire general manager Nelson Rodríguez said. “He’s a proven winner who was an integral part of our success in 2017. Bastian’s talent combined with his character and qualities off the field are vital to our squad as we continue to build a championship program.”

In an open letter posted on the club's website, the 121-cap German international said he and his wife, former tennis player Ana Ivanovic, had settled well in the windy city.

"That burst of support upon my arrival never seemed to stop. In fact, it grew. Whether we played at home or on the road, I must thank all of the fans who came to see our team play," Schweinsteiger wrote.

"The feeling was the same when Ana and I were away from the field: absolutely welcoming and friendly. We felt as if we had found a new home in the city of sport."

Chicago Fire open up the 2018 MLS season with a home game against Sporting Kansas City at Toyota Park on March 10.