Former Germany captain Bastian Schweinsteiger has arrived to a hero's welcome in Chicago. The former Bayern Munich and Manchester United midfielder is expected to play his first Major League Soccer match on Saturday. 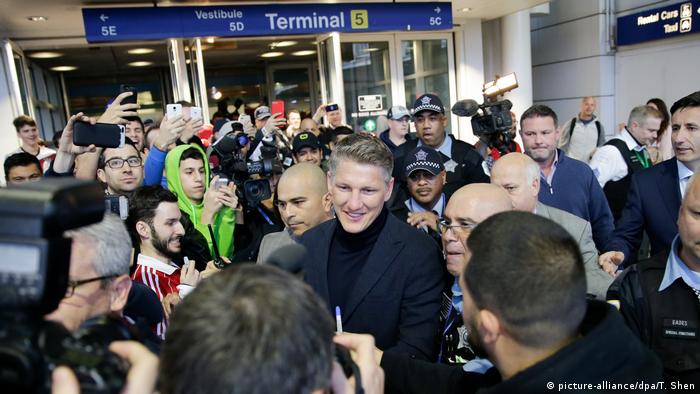 Bastian Schweinsteiger was greeted by an estimated 500 Chicago Fire fans as he and his wife, former tennis player Ana Ivanovic, emerged from customs at O'Hare International Airport. Some supporters banged on drums, while others held up a banner reading  "Fussballgott" - German for football god.

The 32-year-old Schweinsteiger signed autographs and posed for selfies with the fans, but did not give any interviews. He is to be officially unveiled as the Chicago Fire's designated player at a press conference later on Wednesday.

The longtime Bayern Munich player, who received little playing time at his most recent previous club, Manchester United, has signed a one year contract to play for the Fire.

His debut for the club could be as early as this Saturday, when the Chicago Fire host Montreal Impact.