One more try for Kosovo elections | Europe| News and current affairs from around the continent | DW | 16.11.2013

One more try for Kosovo elections

In early November, local elections in northern Kosovo were canceled due to riots and violence. Now it's back to the polls in three constituencies, with both international community and local authorities watching closely. 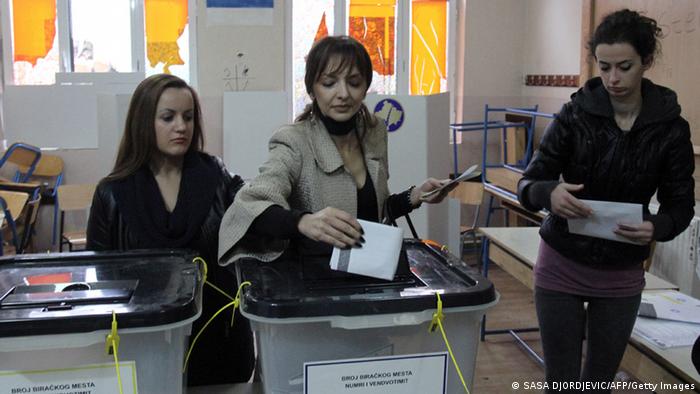 The police in Kosovo are focusing on their mission. Along with a group of international police officers and NATO-led peacekeepers from KFOR, they are on alert to prevent any problems at this Sunday's local election, with polling stations in the northern city of Mitrovica set to close at 6pm.

Problems arose when local elections were held here on November 3. Masked men stormed the polling stations in the northern part of Kosovo, which unlike the rest of the region is predominantly home to ethnic Serbs. The masked men attacked and intimidated election workers as voters waited to cast their vote, before destroying some ballot boxes.

Roberto Gualtieri, head of the EU's observer mission, condemned the violence as "an attack on fundamental human rights." The election commission in Pristina has now decided to repeat elections in three polling centers. Some 23,000 registered voters will be able to cast their ballots on Sunday. 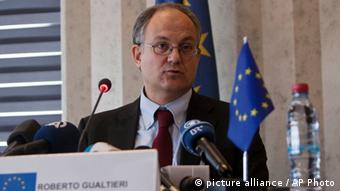 Gualtieri called the violence "an attack on fundamental human rights"

Bernd Borchardt, head of EULEX, the European Union Rule of Law Mission in Kosovo, told DW that a plan was being developed with local authorities to ensure the repeat election would be free, fair, and safe.

"We met several times to go over the lessons we learned from earlier incidents," Borchardt said.

The situation in northern Kosovo is tense, but there appears to be reasonable cause for optimism.

Ulrike Lunacek, rappoteur for Kosovo in the European Parliament, observed the municipal elections earlier this month in 38 communities, and described them overall as democratic. "Compared to the elections in 2010, things went a lot better in large parts of the country," she said. This verdict, however, did not apply to Mitrovica.

Many observers are paying particular attention to how the vote will turn out in Kosovo's north, which remains heavily influenced by Serbia.

The elections were intended to integrate the province into the rest in Kosovo while maintaining a certain degree of autonomy.

The EU was only able to hold elections after many months of mediation. They were, however, largely boycotted by Serbs, both in the country's north as well as in the rest of Kosovo. A large majority of Kosovar Serbs have still not accepted Kosovo's independence. 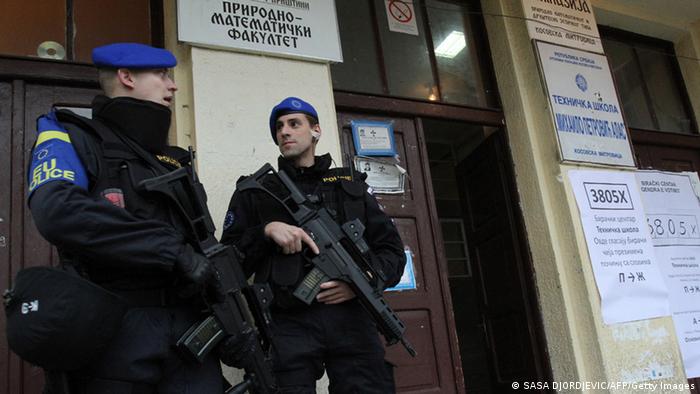 On Sunday, November 17, polling stations on Mitrovica are heavily guarded

Who sabotaged the vote?

The masked saboteurs are yet to be arrested, but Borchardt said investigators are working closely with authorities in Belgrade to find them. As the investigation is ongoing, he would not give any more details.

Lunacek said she suspected criminal Serbian groups of being behind the election-day violence. "Due to the lack of the rule of law, they have made life very difficult for people over the last few years," she said. Kosovan Foreign Minister Enver Hoxhaj accused the Serbian government, a judgement shared by the opposition Democratic Party of Serbia. Authorities in Serbia have rejected the allegations.

Serbian Prime Minister Ivica Dacic called on all Serbs in Mitrovica to cast their votes on Sunday to prevent an Albanian from being elected mayor. "This could lead to conflict, even to armed conflict," Dacic told the Serbian press.

Meanwhile, radical movements and some Serbian opposition parties, led by the Democratic Party of Serbia, had called for the election to be boycotted. If Serbs participated in the election, they argued, it would be viewed as recognition of Kosovo's independence. 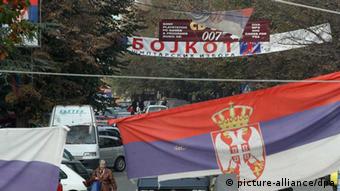 Many Kosovar Serbs intend to boycott the election

Kosovo declared its independence on February 17, 2008, and has been recognized by 105 countries so far, including 23 of the 28 EU members. Serbia, however, maintains that recognition of Kosovo is out of the question. Brussels has repeatedly indicated that a full normalization of the relationship between Kosovo and Serbia is a prerequisite for either of the countries' proposed entry into the European Union. Serbian participation in the local elections would be a first step in that right direction.

Lunacek said that despite the problems in the North, the elections have shown that Kosovo is maturing. Furthermore, she called on the EU to continue to push for an Association Agreement with Kosovo, as well as separate accession talks with Serbia. There should be one condition, however: Belgrade should call for Serb voters to take part in elections.

Fresh elections are to be held in ethnic Serb areas in northern Kosovo after violence and intimidation marred voting over the weekend, said the Kosovan government. (07.11.2013)

The elections in Kosovo were seen as a milestone. For the first time since independence, the Serb minority would take part. But violence overshadowed the polls - and few seem to know why. (05.11.2013)

Kosovo is holding local elections in which ethnic Serbs will be taking part for the first time since independence in 2008 . The vote will test the country's political maturity as it seeks peace with Serbia. (03.11.2013)