One dead after stabbing near Munich

A knife attack near Munich has left one person dead and three injured. According to authorities, the attacker suffers from mental issues and drug problems. Preliminary information has shown no link with jihadi groups. 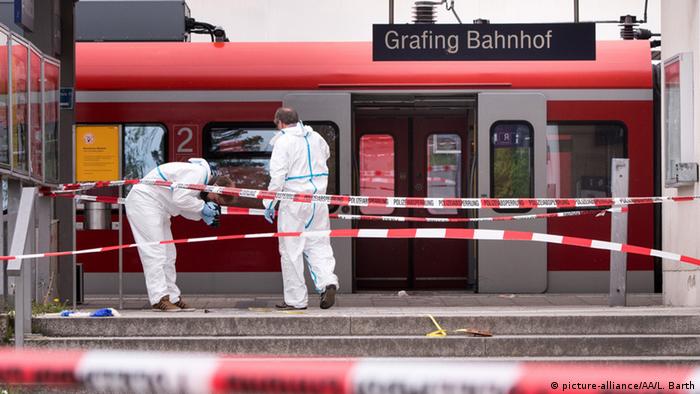 Police have arrested a 27-year-old suspect who stabbed four men at a train station outside Munich, killing one.

The state interior minister of Bavaria, Joachim Herrmann, said the suspect admitted to the stabbings, which took place early Tuesday morning. According to Herrmann, the attacker suffers from mental health and drug problems.

One man, 56, died of his injuries. Three other victims, including two cyclists, are aged 43, 55 and 58. One of the men remains in critical condition.

In a press conference, a police spokesperson said the German national most likely acted alone.

The preliminary probe showed "no evidence of accomplices, or of the suspect being part of an Islamist network," said Petra Sandles, deputy chief of the Bavarian police.

This was confirmed by her colleague Lothar Köhler, who said there was no evidence "in any form" that the attack was linked with jihadis.

However, Köhler cautioned this claim still needed to be verified. The suspect has apparently confessed to screaming "Allahu Akbar," Arabic for "God is great," while attacking.

In a statement to reporters, a press spokesperson from the Bavarian state police described how the attack on Tuesday unfolded.

According to Karl-Heinz Segerer, the 27-year-old German suspect stabbed the first victim in a waiting train at the Grafing S-Bahn train station at around 4:50 a.m. Grafing is a town in the suburbs east of Munich.

Police arrived soon after and arrested the man, who offered no resistance. Bloody prints from his bare feet on the train platform could be seen in TV images of the scene as police carried out their investigation. 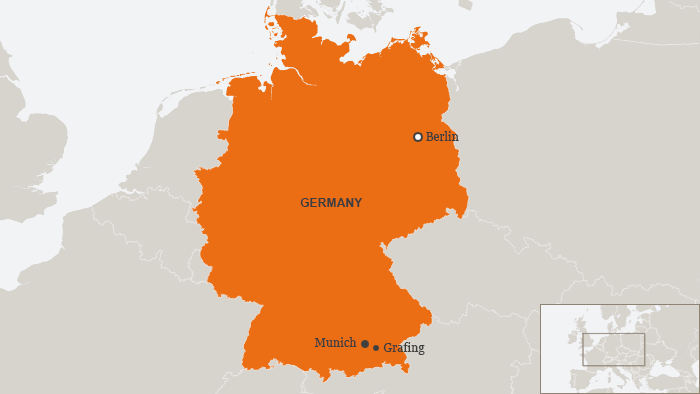 Turned out from hotel

Segerer said the knife used was a 10-centimeter (3.9-inch) blade, and added that the suspect was not registered as a resident of Bavaria.

According to Lothar Köhler from the Bavarian police, the suspect had attempted to spend the night in a Munich hotel but could not afford his stay. He is believed to have chosen Grafing at random.

At the Tuesday press conference, officials said it was difficult to obtain coherent information from the suspect, but said they discovered that he had been receiving unemployment benefits for the past two years. 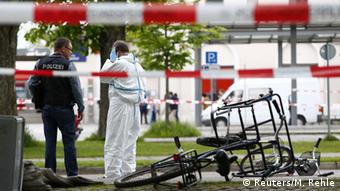 Two of the stabbing victims were cyclists

Police said the suspect lived near the central city of Giessen, in the state of Hesse, and had begun searching his apartment on Tuesday night.

Authorities have yet to decide whether the attacker will be placed in police custody or sent to psychiatric treatment, but they confirmed that he will appear before a judge on Wednesday.

Prosecutors have accused the suspect of murder, as well as three counts of attempted murder.

Earlier, German Interior Minister Thomas de Maiziere called the attack "despicable and cowardly," adding that "the motive for this crime has still not been conclusively explained."

"Something like this is completely new and shocks the people here very deeply," she said.

Police have said that the 32-year-old suspect in a deadly stabbing spree died shortly after being taken into custody along a remote stretch of highway and there was "no longer a risk to public safety."

The injuries to one of the suspects in the killing of 10 people are not thought to be self-inflicted, police say. The crime has rocked the Indigenous community in rural Saskatchewan.

Ten people have been killed and at least 15 others were injured in stabbings in the province of Saskatchewan. Police have launched a manhunt for two suspects across three provinces.