Once enemies, Ethiopia and Eritrea ally against Tigray

Eritrea has been involved in the Tigray crisis in Ethiopia from day one, experts have said. But even though the two countries are fighting together against a common enemy, that does not make them friends. 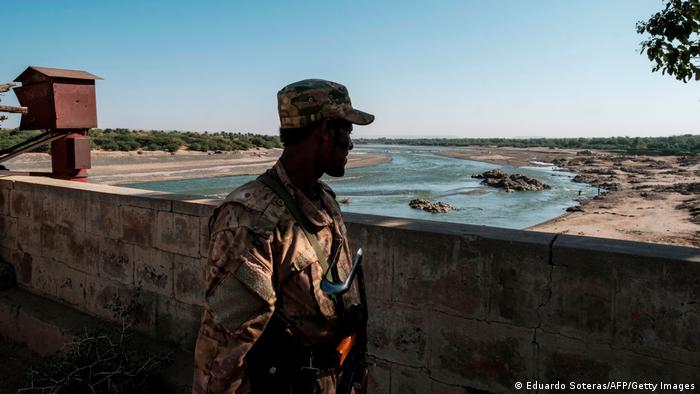 After more than three weeks of war, Ethiopian Prime Minister Abiy Ahmed has claimed victory in his military campaign against Tigray's ruling party, the Tigray People's Liberation Front (TPLF). The fierce fighting there has left thousands of civilians and security forces dead, according to the International Crisis Group. More than 40,000 people have reportedly fled the conflict area, mostly to Sudan. With Abiy resisting calls for dialogue, fears are growing that Ethiopia's internal conflict could spread beyond its borders.

One country is already more involved in the crisis than any other. "[Eritrean President] Isaias Afwerki has been in this war from day one," Kjetil Tronvoll, research director of peace and conflict studies at Norway's Bjorknes University College and a longtime Ethiopia observer, told DW.

Ethiopia and its northern neighbor Eritrea have a long and troubled history of conflict. But today, Eritrea's Isaias and Ethiopia's Abiy stand together in the fight against the TPLF.

"The Eritrean regime has seen the TPLF as enemy for a long time, which is very ironic," journalist and Eritrea expert Michela Wrong told DW.

Until the early 1990s, the Eritrean People's Liberation Front (EPLF), a secessionist movement which Isaias co-founded, and the TPLF were allies in the struggle against Ethiopia's military government. That government was overthrown in 1991, and two years later Eritrea gained independence. The TPLF, meanwhile, became the leading force in the ruling coalition that dominated Ethiopian politics for nearly three decades before Abiy came to power in 2018.

"It was supposed to be brotherly regimes that had fought together and were going to be good neighbors," Wrong said.

But in 1998, the two countries went to war over territorial, economic and political disputes. Tens of thousands of people died.

"It was a bitter conflict, and ever since then the two regimes have hated each other," said Wrong.

After a peace agreement in 2000, Eritrea and Ethiopia remained in a state of armed standoff for nearly 18 years, which ended after Abiy, from the Oromo Democratic Party, became prime minister.

"Isaias had rejected all peace negotiations," said Tronvoll. "But when Abiy started to dismiss Tigrayan high officials in early June 2018, Isaias was happy to engage because it was game over for TPLF."

In Tronvoll's view, Isaias saw reconciliation with Ethiopia under Abiy's leadership as "just a continuation of the war against TPLF."

William Davison, a senior analyst for Ethiopia at the International Crisis Group, stressed that the relationship between Eritrea and Tigray is still bad, and that has ramifications for Ethiopian-Eritrean ties to this day.

"Tigray and the TPLF leadership are seen as the main obstacle to improve relations between Ethiopia and Eritrea from the perspective of the leadership in those countries, and also in their vision the Tigrayan leadership is seen as a threat to broader regional stability," he said. 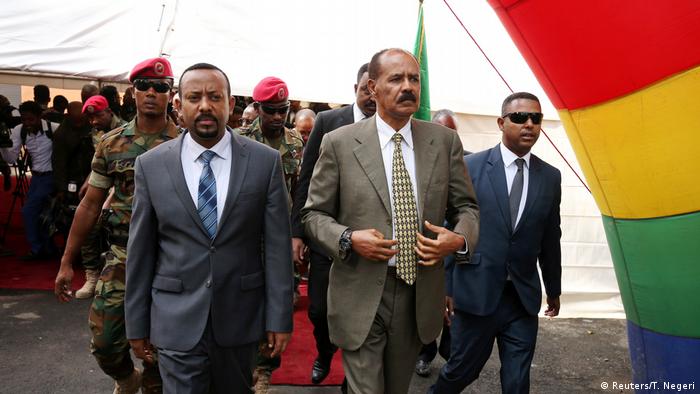 Abiy and Isaias normalized ties between Ethiopia and Eritrea in 2018

Davison explained that there is an advantage to Ethiopia allying with its neighbor in the crisis. "Tigray has a long border with Eritrea, so to assist the Ethiopian federal government campaign to remove Tigray's government it made sense to use Eritrea at least for logistical support," he said.

In the long run, Abiy and Isaias have the same objective, which motivates them to work together after years of conflict between their countries, said Tronvoll. "Abiy needs Isaias' backing to further marginalize the TPLF from power," he added.

The TPLF does not recognize Abiy, who was awarded the Nobel Peace Prize last year for his reconciliation efforts with Eritrea.

Eritrea is willing to offer its own soldiers as "cannon fodder" to defeat the Tigrayan forces in the war, Tronvoll said.

"A big share of the troops used and sacrificed on the northern front are Eritrean soldiers, many of them underage," he explained. "They are 14, 15 or 16 years old and are used as a first human wave, storming the entrenched position of Tigrayan defense forces and are killed in [the] hundreds, thousands. The second wave might manage to reach the fences."

But can this new alliance also be considered a new friendship? Tronvoll is skeptical. "This is Ethiopia: In the past there have always been regional elites who were fighting each other and allying [with] each other in order to gain the upper hand," he said. "The whole mentality of warfare, conflict and political alliances is deeply rooted historically. And hence you can explain why they shift so rapidly from friends to enemies and enemies to friends."

As Wrong put it: "My enemy's enemy is my friend. I think there is a sense of that happening here."

"They are both regimes that felt they have a problem with the TPLF," she added.

Wrong does not believe the conflict in Tigray will be resolved anytime soon. In her view, the new relationship between Ethiopia and Eritrea is simply a "temporary alliance" with a common goal.