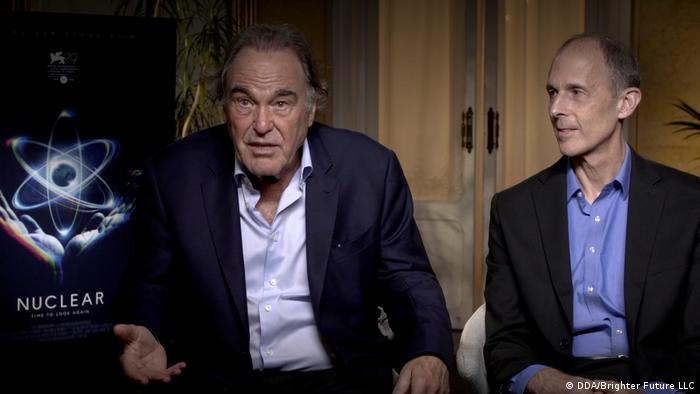 "Nuclear" was one of the many environment-related films featured at the 79th Venice Film Festival. Other movies included Noah Baumbach's satirical "White Noise” about an environmental catastrophe and "Siccita" by Paolo Virzis offered a dystopian fiction set in Rome, where it hasn't rained for three years.

For "Nuclear," the US star director Oliver Stone worked for nearly two years with the scientist Joshua S Goldstein. The film advocates nuclear energy as a realistic solution to climate problems, arguing that it could be used to generate clean energy and secure our future.

What motivated Stone to make the film was his reaction to climate change, which he says scares him. "I've done 20 feature films and 10 documentaries. And I want to, with the remainder of my life, do something that would help people. It would be significant and I can't think of any better way than to try to teach what I learned from this man," Stone said.

"This man" Stone was referring to is the bestseller author Joshua S Goldstein, who was sitting next to the filmmaker during their conversation with DW.

Goldstein's book "A Bright Future: How Some Countries Have Solved Climate Change and the Rest Can Follow," which talks about securing the future of humanity with nuclear power, inspired Stone to make this movie.

Stone aims to "overcome this ignorance," which in his view "has thrown the United States and all of the world into this mess that we got ourselves into." 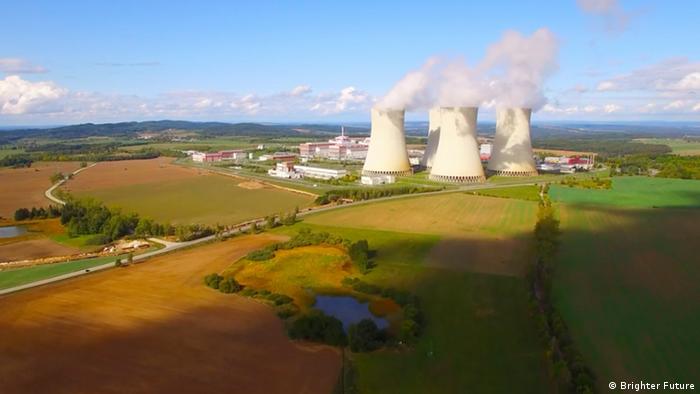 A still from 'Nuclear'

Consuming less is not an option

The film is based on the premise that in 30 years, humanity's need for energy will not be fulfilled through conventional or green energy alone. By 2050, India, China and the African continent would use up so much energy that the resources of the earth would be depleted.

The risk factors include the fact that India and China are already big consumers of energy and the US has not changed, despite all the talk about renewable energy and changing their lifestyle, he told Italian newspaper "Republicca."

In Goldstein's view, it wouldn't work to require "people in India and Indonesia, Vietnam and China to consume less than they do now. It's not going to happen. They want more. They're going to have more. If we have a clean source like nuclear that can work, they'll use it. Right. And if they don't have it, they'll use coal. And that's our problem."

However, there are doubts that nuclear reactors are as clean as Goldstein and Stone claim they are. Advocates of nuclear power argue that atomic reactors don't create carbon monoxide while producing electricity, but according to the German environment office, greenhouse gases are produced especially before and after electricity production, while building reactors, during uranium mining and up to the final disposal. The filmmaker and the scientist do not address these issues or do so only superficially.

It is also to be noted that, according to report by the World Economic Forum, India has the fastest-growing rate of renewable electricity of any major economy; China is the world leader in wind and solar energy production. 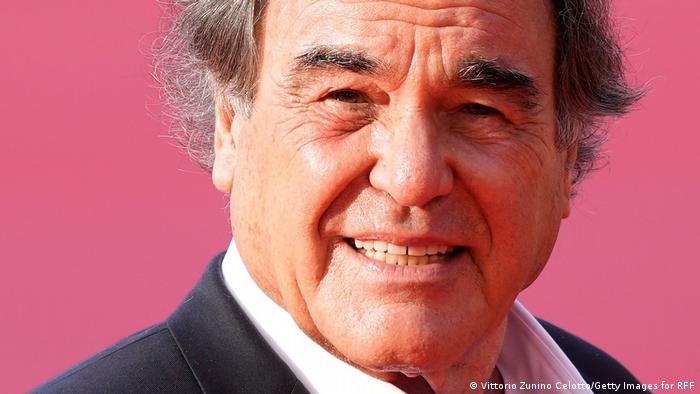 Germany is 'a bad example'

Oil, gas and coal companies are still profiting too much from the climate catastrophe — a crime, according to Stone.

He considers Germany, which is mentioned several times in the film, a prime example of failed environmental policies, particularly because of its decision to step away from atomic energy. Stone said the Green Party in Germany needs to worry about oil and coal companies, instead of getting angry and upset about nuclear energy.

Germany decided to shut down all its atomic reactors after the Fukushima catastrophe in 2011. The events in Japan triggered a nationwide discussion on the further usage of nuclear energy. Stone believes, there is a basic confusion between nuclear energy, nuclear wars and atom bombs. It is impossible that a reactor explodes the same way as an atom bomb. "There are all these fears. Fear kills the mind. It kills creativity. Man must grow."

But he still sees a potential to change in Germany. "So in Germany, you're young and thank God it's a new generation because it's the only way we're going to get away from these old ideas."

Recently, a survey by Spiegel news weekly revealed that a majority of Germans (78%) would prefer to continue using the nuclear reactors in the country considering the current bottlenecks in energy supply. Germany's Vice Chancellor and Minister for Climate and Business, Robert Habeck of the Green Party, has meanwhile said he would keep the country's two atomic reactors on "standby" for energy production after Moscow invaded Ukraine, which has  gas exports to EU countries including Germany. Many people in the country are now facing skyrocketing energy prices and severe gas shortage in winter.

A 'clean' source of energy

Nuclear energy is a safe resource, according to Stone and Goldstein. "We've been fed a lie about nuclear power, which is that any accident, any release of radiation is a catastrophe for the world," Goldstein says. "But fact is, that we are exposed to low levels of radiation all the time. Our body is built for it. Our DNA repairs itself," the scientist adds.

Oliver Stone also plays down the danger of nuclear reactors in his film. Catastrophes like Fukushima and Chernobyl are exceptions. Goldstein says, "So, the what-ifs of Fukushima, if some radiation got out, but it didn't hurt anybody. Chernobyl, more radiation. And it did hurt people because they had to fight the fire and they weren't protected from it." The scientist does not address the long-term consequences of Fukushima and Chernobyl.

Currently, there are concerns regarding the Zaporizhzhia nuclear power plant in Ukraine. According to the IAEA, the chances of a nuclear catastrophe on the site have increased following Russian invasion.

"But the idea that this plant in Ukraine, what if the power line goes and what if the diesel generators don't work? It's still contained in the containment building, which wasn't true at Chernobyl. So, if any got out, it's going to be low-level radiation. You can show it on a map. You can track it and measure it, but it's not going to hurt people. Very unlikely to hurt anybody," Goldstein argues.

"It's an irrational fear," he adds. "It's a contamination fear put into our minds to make us afraid of nuclear. Because, you know, the oil companies and others are afraid that will switch to nuclear power,"

Furthermore, Stone says one shouldn't be distracted by the war, because "wars come and go and famines come and go. But unfortunately, climate change may come, but not go. That is an important issue. So when the war is over, you're still going to have an issue with how you get energy." Unless we solve that, Stone says, humanity has a serious problem. 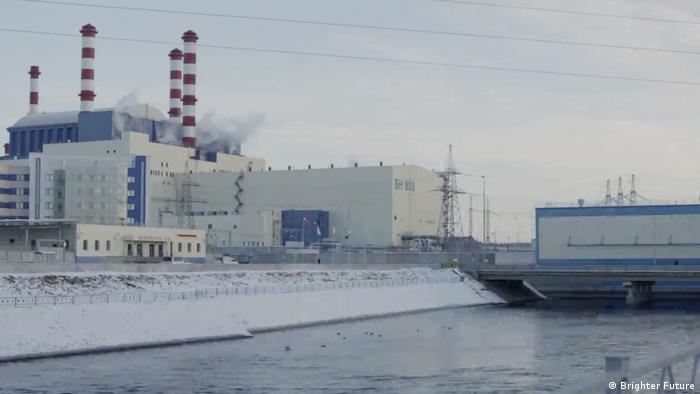 For Oliver Stone, the extreme danger of nuclear power as claimed especially by environmental activists can be traced back to competition and conflicts of interest.

Stone and Goldstein see oil, gas and coal companies as big evils who have a vested interest in discrediting nuclear power.

Meanwhile, social media discussions about the movie are heated. Some people share the filmmaker's view, while others say the film is too biased towards the director's premise and hardly believable.

A Twitter user criticized Oliver Stone in their feed, saying, "You should be ashamed of yourself. Every step of the process uses carbon. It's expensive, can't be insured, needs lots of water to cool the spent fuel rods. No one will take the waste. There could be meltdowns. And we don't need it!

Oliver Stone stands behind his movie, stating that Goldstein's book, which he uses as his basis, presents facts. To substantiate his premise, Stone traveled to Russia, France (according to him, the most advanced nuclear country in the world) and the US. He spoke to scientists and citizens about their fears.

For a long time, atomic energy was categorically rejected, Stone says, but people are considering it again. Green energy is not dependable enough. "I like renewable energies, but they cost money, they need space; wind and sun are dependent on the weather and do not offer security or big quantities of energy," he argued.

Oliver Stone's film is a provocation on screen. It is not clear whether the nuclear industry supported him in producing this movie, but the director is no stranger to controversial themes.

In 2016, he produced the documentary "Ukraine on Fire," with sound bites from Russian President Vladimir Putin and former Ukrainian President Viktor Yanukovych, who is depicted as the victim of an orchestrated coup with the aid of the American intelligence apparatus. He also directed a series of interviews with Putin over the span of two years, which was released in 2017 as "The Putin Interviews."

After a yearlong hiatus during the coronavirus pandemic, the Cannes Film Festival is set to return in July — as a socially distanced event.