Oliver Kahn: Germany Can Win the Soccer World Cup | News and current affairs from Germany and around the world | DW | 03.01.2006

Some revere Oliver Kahn as a gift to German soccer, others see him as arrogant and smug. The goalkeeper spoke to DW-WORLD about his country's chances to win the World Cup, which takes place in Germany in the summer. 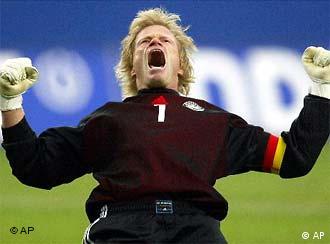 Anything can happen at the World Cup, says Kahn

DW-WORLD: How do you expect Germany to fare in the World Cup opening game against Costa Rica?

Oliver Kahn: Everything's open for both teams, everything's possible. That doesn't mean that the Costa Ricans or the Germans face an easy task. On the contrary, both Germany and Costa Rica will have a tough time winning the game. The opening match is a test of nerves, a unique situation. The most difficult part of the World Cup is the beginning. During the first match the pressure is enormous; during the opening match it's even greater. Of course, luck also plays a role.

What do you know about Costa Rica and Ecuador?

Not much, almost nothing. Both of these teams' ways of playing are virtually unknown in Germany. We didn't have a chance to watch their qualification. We don't get as much information about them as we do about Argentina or Brazil, for instance. We still have time to inquire, to learn what kind of soccer they play, what their strengths and weaknesses are. There's no doubt that we'll know everything we need to know in time for the World Cup. We'll know them both inside and out.

Germany is the favorite in its group. Who do you think will take second place: Costa Rica, Ecuador or Poland?

There's no first, second or third for me -- not so far anyway. We all have to win our games regardless of who we're playing. We have to beat Costa Rica, beat Ecuador, beat Poland. It's only really about making it to the next round. 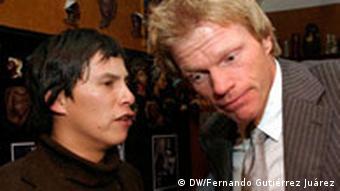 Are Costa Rica and Ecuador capable of beating Germany?

Anything's possible in the World Cup.

Will Germany become World Champion in 2006?

It's entirely possible. The enthusiasm of 80 million Germans is a very important factor. In the national team you sense that such a goal is doable. I believe we can win the title. I have a lot of confidence in us.

Who will be number one in the German goal at the World Cup?

I have no reason to doubt I will be number one and stand in the goal at the World Cup. Jürgen Klinsmann has said it clearly. I am number one; there's nothing there to discuss.

Why are you so sure?

I know what the pressure's like and how it is to play in the World Cup. I know what's needed to successfully play in a tournament. Such a situation isn't foreign to me, I've already experienced it with the national team and with Bayern Munich. The training staff knows exactly what my contribution is.

The route to a World Cup final can be set in the first matches. In the past, Germany have had easy draws. In 2006, they face Costa Rica in the opening match in Munich. Poland and Ecuador are the remaining opponents. (Dec. 10, 2005)

Take a look at our dossier about the German World Cup's many facets, from start to finish.

The Making of a World Cup Legend

Here, DW-WORLD recounts five of Germany's most exciting contests from the team's long association with the greatest prize in international soccer.