Mascha is planning a career as a UN interpreter. But the sudden death of her boyfriend throws her completely off track. Olga Grjasnowa tells the story of a generation that knows no borders, but has no home either. 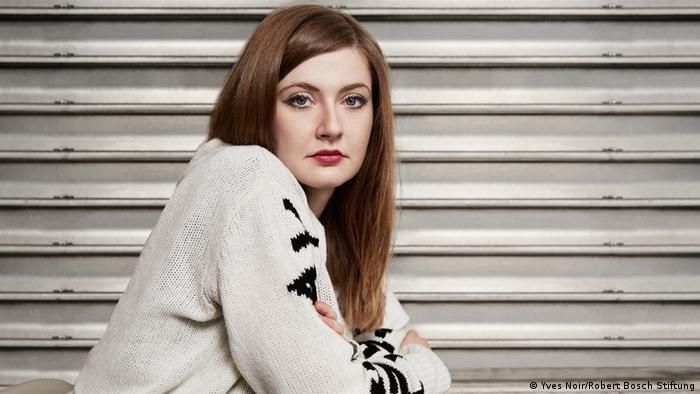 In her debut novel, Olga Grjasnowa paints a portrait of a modern young woman who fights against her psychological wounds in a haphazard and furious manner — and defiantly seizes her place in life.

Mascha, the main character in Grjasnowa's novel, is a "contingent refugee," as it is called in official German. "I love this strange expression," says the writer. German bureaucracy has often helped her. The parents of novel heroine Mascha, on the other hand, fail because of it.

"Germany had no use for my father. In his social Siberia he wore jogging pants and those undershirts that are called 'wife beaters' (not that he ever did). From one day to the next, father had given up. He didn't befriend other people. He rarely left the house, and if so, it was mostly to compare prices at the gas stations."

Not everything is autobiographical in her first novel, but many things — slightly altered — show parallels to Olga Grjasnowa's biography. When she, the refugee child from Azerbaijan, starts school at the age of 11, she can hardly speak a word of German, only "hands up" (Hände hoch), which she knows from Soviet war films.

Grjasnowa ended up graduating from high school with excellent grades. Later, she studied Literary Writing at the renowned German Literature Institute in Leipzig. 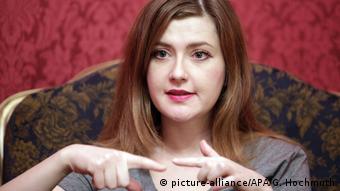 Her protagonist Mascha — a young woman in her mid-20s who falls in love quickly and doesn't trust anyone — likewise learned as a child that language means power. Her way out of the speechlessness of the migrants is an excellently completed degree in interpreting. With her diploma in her pocket, the world is her oyster: She speaks five languages fluently and a few "as well as the 'Ballermann' tourists do German," she explains laughingly to her German boyfriend.

Mascha is a typical representative of the "internship generation," young adults who are ambitious and well-educated. She wants to get to the top, do something meaningful and work for an international institution like the UN. But life for her takes a different turn. Following the sudden death of her boyfriend, who does not survive a case of sepsis, her laboriously constructed little world collapses. 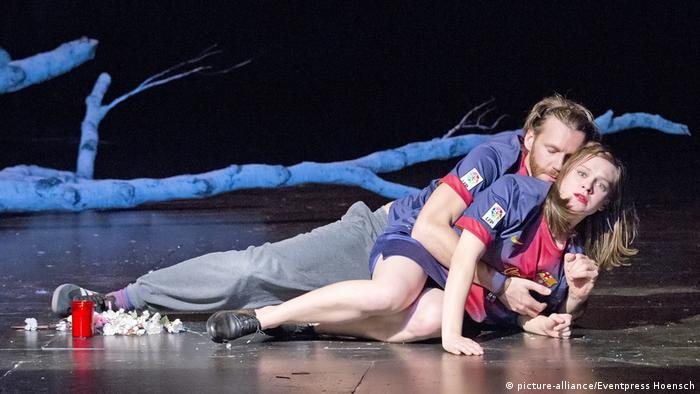 "All Russians Love Birch Trees" was premiered on stage in 2013

The young woman hastily travels to Israel to start her first job in Tel Aviv. At the airport, her laptop is confiscated by heavily armed soldiers, and she is targeted as a foreigner.

"Every piece of clothing, every scarf, every pair of panties was unfolded. All jars were opened. Even my electric toothbrush was tested for explosives. The fact that I'd hardly brought any clothes, but instead many dictionaries, aroused suspicion."

Her increasing desperation makes her panic-stricken. After a visit to her Jewish relatives, who emigrated to Israel, the past catches up with Mascha: Images of pogroms in her native Azerbaijan that have etched themselves deeply into her mind haunt her. Her fear of intimacy grows into paranoia.

Literary voice of her generation 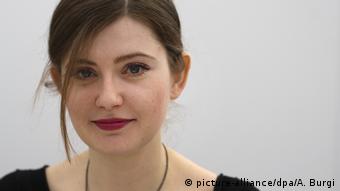 A promising star at the Leipzig Book Fair in 2012

Olga Grjasnowa was born in Baku, the capital of Azerbaijan, in 1984 and grew up in the Caucasus. She is one of the 200,000 Jewish emigrants from the former Soviet Union who have been allowed to enter Germany since 1991. She arrived with her family in Germany in 1996, staying in the temporary camp Friedberg. It was difficult to settle in.

Grjasnowa is fluent in Russian and now speaks several languages. But she can only write in German, she says. Her debut novel immediately became a bestseller in 2012. Literary critics wrote enthusiastically that her unpretentious voice had hit the nerve of her generation.

Today she is a member of the German branch of PEN and a recognized writer. She now resides in Berlin-Neukölln.

Olga Grjasnowa was born in Baku, the capital of Azerbaijan, in 1984. Her mother is a piano teacher, her father a lawyer. In 1996, they arrived in Germany as a refugee family and initially lived in a refugee home. Grjasnowa later went to school in Frankfurt. She graduated from the German Literature Institute in Leipzig and gained experience speaking other languages while studying in Poland and Israel. Her first novel was originally planned as a Bachelor's thesis. The book became an instant literary success.