Australian and Indonesian researchers have found the world's oldest-known cave paintings on the island of Borneo. The art was painted at least 40,000 years ago, debunking the view that cave art solely existed in Europe. 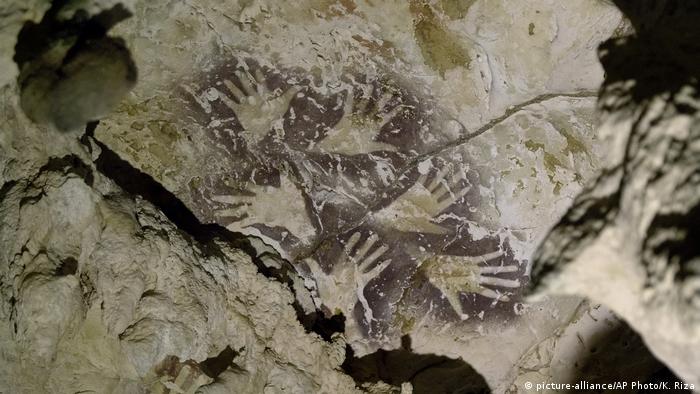 Researchers have found the oldest known example of an animal painting, a red depiction of a bull on the wall of a cave in Indonesia.

In an article published by the journal Nature late Wednesday, uranium-series analysis of calcium carbonate deposits showed that animal sketches inside a Borneo limestone cave were painted at least 40,000 years ago.

That find showed that figurative art developed "most or less" simultaneously in Asia and in Europe, including in famed caves in Spain, Italy and France, said Maxime Aubert, an associate professor at Griffith University in Australia.

"Who the ice age artists of Borneo were and what happened to them is a mystery," said co-research leader Pindi Setiawan of Indonesia's Bandung Institute of Technology.

During the last ice age, when sea levels dropped as much as 120 meters (about 400 feet) compared to the present day, Borneo formed the easternmost tip of Eurasia, with Europe at its westernmost end.

"It now seems that two early cave art provinces arose at a similar time in remote corners of Paleolithic Eurasia: one in Europe and one in Indonesia," said Adam Brumm, another Griffith archaeologist involved in the study.

To carry out the uranium series dating, Aubert's team took small, one-centimeter diameter samples from the Borneo artworks as well as the underlying calcite.

Researchers came to similar conclusions on the Indonesian island of Sulawesi in 2014, uncovering figurative art that was found to be more than 35,000 years old.

The oldest probable known rock art find is a cave drawing near Cape Town in South Africa, dating back 73,000 years.

Aubert said a next step would be to date ancient pieces in Australia.

"Our research suggests that rock art spread from Borneo into Sulawesi and other new worlds beyond Eurasia, perhaps arriving with the first people to colonize Australia," said Aubert. "It's an intimate window into the past."

A new dating technique used on 50 cave paintings in Spain has led scientists to believe that the art could be the work of Neanderthals. (15.06.2012)

The partial jaw was found alongside 60,000 simple tools in a cave in Israel. A scientist who discovered the fossil said: "The entire narrative of the evolution of Homo sapiens must be pushed back." (25.01.2018)

How would Bonn's prehistoric residents have viewed the UN's climate conference from their clifftop lookout over the Rhine? Looking back 14,000 years, Ian Johnson offers a different perspective on Earth’s climate drama. (18.11.2017)