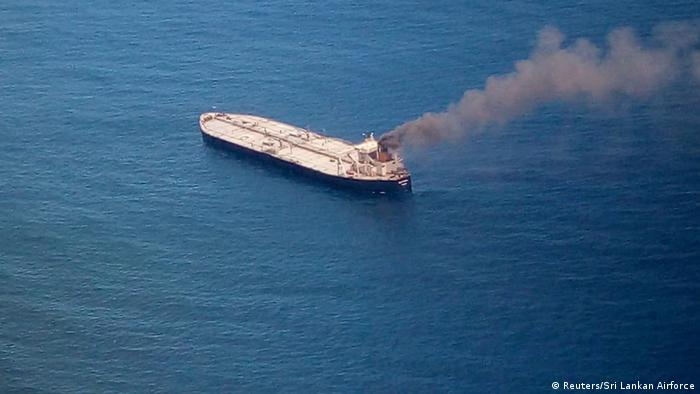 An oil tanker caught fire near the coast of Sri Lanka on Thursday as it was traveling from Kuwait to the Indian port of Paradip.

Sri Lankan authorities said there was no immediate danger to the coastline should there be a leak from the New Diamond tanker, which was carrying 270,000 tons of crude and 1,700 tons of diesel.

The vessel had 23 people on board, 18 Filipinos and five Greeks. One Filipino crew member was missing, another was injured. The rest were rescued by a Panama-flagged vessel, according to the Sri Lankan navy.

Tugboats traveled to the scene of the fire in order to battle the blaze.

"An Indian coast guard vessel and one of our ships are now in the process of dousing the flames that have spread to the deck of the tanker's service area," navy spokesman Captain Indika de Silva told French news agency AFP.

The New Diamond oil tanker is classified as a very large crude carrier (VLCC) and is about 330 meters (1,080 feet) long. It is larger than the Japanese bulk carrier MV Wakashio, which crashed into a reef just off the coast from Mauritius last month and leaked more than 1,000 tons of oil into the nation's waters.

Sri Lankan officials said they were hopeful that they could contain the fire on the New Diamond. But they would require help if a spill were to take place, as they do not have the proper equipment to deal with that situation.

India said it was sending three naval vessels and two more coast guard vessels to deal with the fire and potential marine pollution.

US foreign broadcasters get new chiefs under Biden 31m ago

Russian ship resumes work on Nord Stream 2, despite US sanctions 1h ago