An oil slick has been spotted near a burning supertanker off the east coast of Sri Lanka. Officials had warned they would need help if the vessel started spilling oil as they lacked the proper equipment to deal with it. 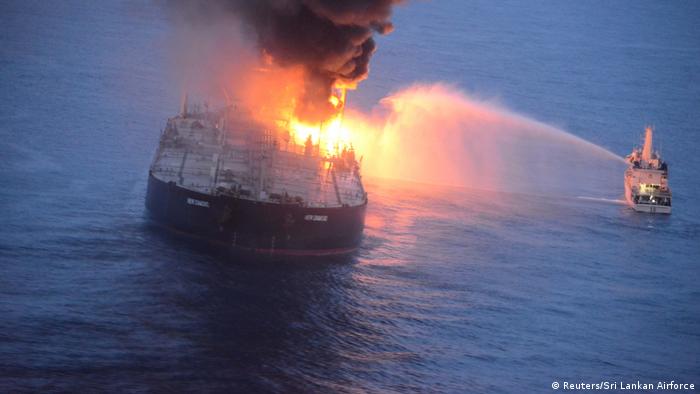 The New Diamond supertanker, carrying the equivalent of about 2 million barrels of oil, has been burning since Thursday.

The oil slick was spotted near the Panama-registered tanker, which is about 55 kilometers (34 miles) from the country's coast.

"The ship has tilted slightly towards where the fire broke out due to the large amount of water sprayed to douse the fire. Because of this, oil in the engine room appears to have leaked out to the sea," said a Sri Lankan navy statement.

The vessel had reported a fire on Thursday after an explosion in the boiler room killed a Filipino crew member. The blaze appeared to have been extinguished, but flames erupted again on Monday.

Sri Lanka and neighboring India have launched a major operation to battle the blaze and prevent an environmental disaster in the Indian Ocean. 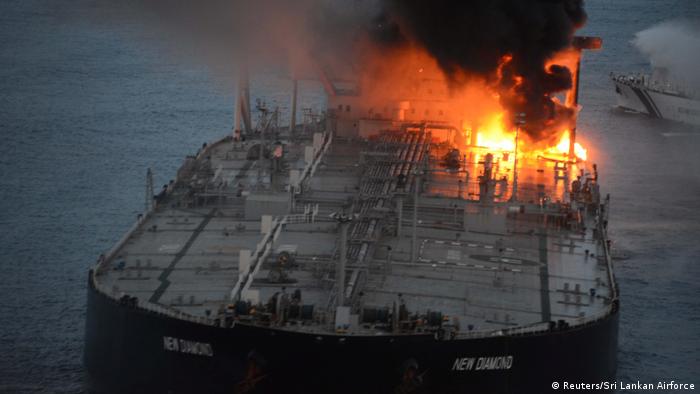 The New Diamond is classified as a very large crude carrier (VLCC) and is about 330 meters (1,080 feet) long. It is larger than the Japanese bulk carrier MV Wakashio, which crashed into a reef off the coast of Mauritius last month and leaked more than 1,000 tons of oil into the nation's waters.

Dappula de Livera, Sri Lanka's chief prosecutor, has ordered authorities to pursue a claim for damages and told the owners of the New Diamond to tow it away from the country's waters.

The supertanker had been transporting its cargo from Kuwait to a port in India when the fire broke out.