Disadvantaged kids in Germany are performing better at school than they did a decade ago. According to the OECD, that's likely thanks to a positive classroom environment and a mix of students from diverse backgrounds. 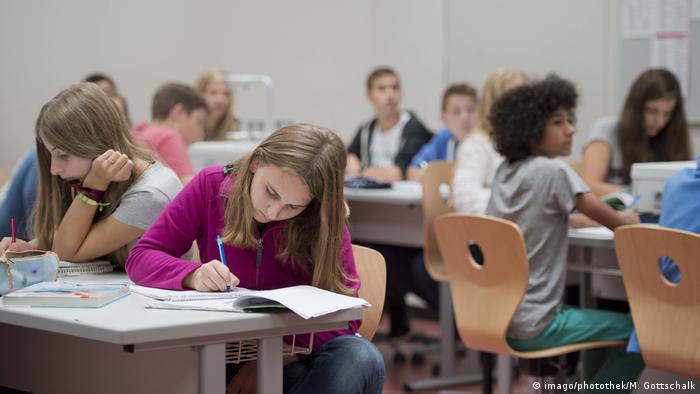 A growing number of socially disadvantaged students in Germany are achieving solid scores in reading, mathematics and science, the Organization for Economic Cooperation and Development (OECD) said Monday.

In a new study presented in Berlin, the OECD found that the biggest improvement in the performance of these so-called "resilient" students was recorded in Germany.

In 2005, around a quarter (25 percent) of pupils in the country with a low socio-economic status managed to get decent marks. In 2015, that number jumped to a third (32.3 percent).

The report analyzed the results of the OECD's latest Program for International Student Assessment (PISA), which tested some 540,000 15-year-olds in 72 countries. At the same time, students were quizzed about the education and occupation of their parents, as well as about other factors such as whether there were books in the family home. The OECD then used this information to draw conclusions about a student's socio-economic status.

Read more: #AForEffort: Held back by the education system

Why are students improving?

The analysis stressed that a positive school environment played a huge role in boosting students' performance. Factors such as a low student turnover, trusting relationships with teachers and motivational school leadership all gave pupils a better chance, the OECD said.

It added that those from less-educated families generally got better results if they were taught in a diverse classroom, together with their better-off peers.

The organization also stressed that a student's life outside school could be just as important. For example, disadvantaged kids who didn't speak the language of instruction at home were half as likely to meet learning outcomes.

Girls also had a "slight, yet significantly lower chance" of bouncing back than their male counterparts.

The OECD report recommended that teachers set aside time to "strengthen parent-teacher talks, student counselling and team planning in a lasting way."

Of the countries surveyed, Hong Kong had the highest proportion of "resilient" students, with 53 percent, while Macao had 52 percent. At the other end of the scale, the lowest numbers were recorded in Indonesia, Brazil, Mexico and Romania.