OECD school report: Asians top of the class at teamwork

High-achievers such as Singapore and Korea are used to acing the Pisa study in math, reading and science, now they can add teammwork to their portfolio. And German pupils showed they can hold their own at global level. 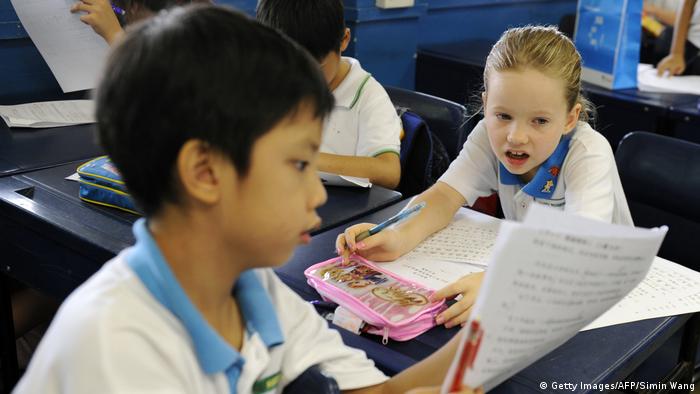 East Asian students top the table for problem-solving teamwork, a report by the Organization for Economic Co-operation and Development (OECD) found on Tuesday, potentially defying stereotypes that those countries' success in math and science comes at the cost of poor social skills.

Read more - Opinion: The education crisis in Germany is over

Employers have increasingly stressed the need for cooperation skills in the workplace, with some experts encouraging education systems to reduce their focus on individualistic exam systems.

"Search engine knowledge is dramatically losing relevance because Google can do it better," said Schleicher.

Every three years the OECD Program for International Student Assessment (Pisa) tests half a million 15-year-olds in 72 countries, with a particular focus on math, reading and science.

The supplementary 2015 Pisa report published on Tuesday — which was limited to the 32 OECD nations and 20 partner economies — is the first of its kind to test teamwork as well.

Role models or not?

Asian education systems consistently score well in international league tables and in Europe are often held up as models to emulate. But critics accuse them of encouraging rote learning, overly focusing on exams, and pushing children too hard.

The Pisa study ranked children in Singapore and four other high-achieving Asian economies higher than most for team-based problem solving. The finding that runs counter to the commonly held stereotype of intelligent Asian students held back by poor social skills.

Read more - The pressures of being a fourth grader

Success in collaborative problem solving is "positively linked" to performance in the core subjects of science, reading and math, the researchers claimed, but not necessarily a decisive factor. Students in the four Chinese provinces that took part in the research came a middling 26th place — despite showing solid academic success elsewhere.

And while pupils in China fared worse at teamwork than their core skills scores would suggest, those in Japan and Korea outperformed expectations.

"In a nutshell, while the absence of science, reading and mathematics skills does not imply the presence of social and emotional skills," the researchers wrote, "social skills are not an automatic by-product of the development of academic skills either." 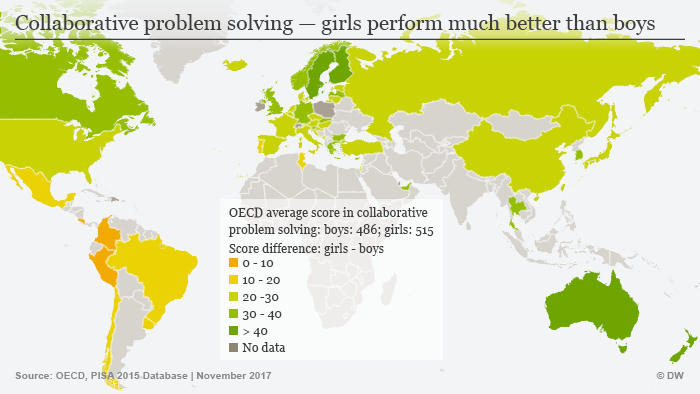 In every country measured girls outperformed boys at team-based problem solving. The greener the country appears on the map, the greater the gender gap.

Girls beat boys across the globe

The report also called on countries to reduce the gender gap in schooling.

Girls significantly outperformed boys at teamwork in every country and economy that took part in the assessment. But this advantage does not necessarily translate into employment success later in life.

Their attitudes towards others were also more positive, with girls showing a greater interest in other people's opinions and more desire to see others succeed.

The researchers suggested schools should work with boys to foster "appreciation of others" and "interpersonal relationships" to bring their teamwork abilities in line with girls.

"It is all very well for boys to understand that teamwork can bring benefits," the researchers wrote. "But in order to work effectively in a team and achieve something in a collaborative fashion, boys must be able to listen to others and take their viewpoints into account."

The first Pisa test was administered in 2000. Since then, it has grown into a global league table closely watched by journalists and policy-makers alike.

In 2014, a group of 83 academics published an open letter in the Guardian newspaper alleging that Pisa's continuous cycle of global testing "harms our children and impoverishes our classrooms."

One particular complaint focused on the narrow range of measurements and the limitations of what the study can test.

Though the researchers take care to carefully caveat findings, these are often not adequately conveyed by governments and media.

An Australian study shows Asian schoolchildren lead their western counterparts by up to three years. Some attribute the "success in Asian education" to rote learning and social pressure. (21.02.2012)