Obama Voices Support for NATO Expansion Despite Russian Qualms | Europe | News and current affairs from around the continent | DW | 25.03.2009

US President Barack Obama said in a meeting with NATO's Secretary General that he wants to improve relations with Russia. Yet Obama said he also feels the alliance should not be afraid of expanding its borders.

The future of the North Atlantic Treaty Organization's relationship with Russia was a big topic as Obama met with NATO Secretary General Jaap de Hoop Scheffer on Wednesday, March 25.

Obama said he wants to "reset" US-Russian relations, which have become increasingly strained.

But Obama said that good relations with Moscow would not come at the expense of NATO expansion, something which Russia vehemently opposes. The United States has supported bringing countries such as Georgia and Ukraine into NATO, although Obama did not mention the countries by name.

Obama said it was important to "send a clear signal throughout Europe that we are going to continue to abide by the central belief ... that countries who seek and aspire to join NATO are able to join NATO."

Scheffer played down the alliance's disagreements with Russia after Wednesday's meeting.

"We have many things on which we disagree, but NATO needs Russia and Russia needs NATO, so that's one of the things we agree on," he said after the meeting.

But the alliance's top commander says NATO's relationship with Russia is more difficult than at any time since the end of the Cold War.

General John Craddock pointed to Russia's war with Georgia in August of 2008 as well as disputes with Ukraine over gas supplies this year as contentious issues. He made the comments as part of written testimony before the US Senate Armed Services Committee. 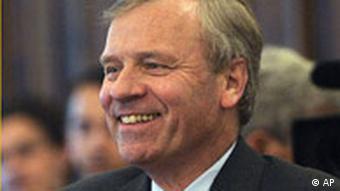 Russia is also unhappy with US plans to set up a missile defense system in Poland and the Czech Republic.

"We are in a time of uncertainty in the US-Russian relationship brought about by disagreements over European security, Russia's role in what it regards as its neighborhood, and Russia's decision to send forces into Georgia and to recognize the breakaway regions of South Ossetia and Abkhazia," Craddock wrote.

After the Cold War ended, many believed that Europe and Eurasia were no longer at threat of being invaded, an assumption which "has been now proven false," Craddock said, pointing to Russia's incursion into Georgia.

Craddock also said he's like the United States to maintain the size of its military presence in Europe, despite plans to reduce the number of US soldiers stationed in countries such as Germany.

While Russia was a main topic of discussion, Obama and Scheffer also discussed the alliance's stragegy in fighting militants in Afghanistan and plans for NATO's 60th anniversary summit. The meeting will be held in Germany and France on April 3-4.

Obama said the 60th anniversary of the military alliance was "testimony to the effectiveness of NATO in creating stability and peace and prosperity, laying the groundwork for so much that has taken place over the last several years." 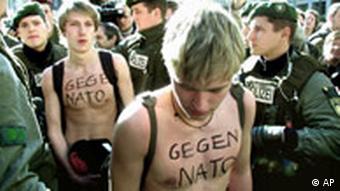 German authorities have said they expect about 25,000 demonstrators to show up for the NATO summit, which will be held in the towns of Baden-Baden and Kehl in Germany and Strasbourg in France.

Germany will provide 600 soldiers and 15,000 police to guard the 3,500 delegates from attacks, Germany has said. Germany and NATO will also deploy warplanes and surveillance aircraft to patrol the airspace.

Protesters have threatened to block roads and carry out acts of civil disobedience during the event.

Prime Minister Vladimir Putin sharply criticized a gas agreement between the European Union and Ukraine, warning that energy deals which sideline Russia could jeopardize Moscow's ties to the 27-member bloc. (23.03.2009)

The UN said 6 million Ukrainians have left country, while over a million have returned home. Meanwhile, Finland's leaders say it should join NATO "without delay."