In his first major address since leaving office, Obama urged young people to help bridge political divides. He spent most of his time on stage listening to comments from students at the university where he once lectured. 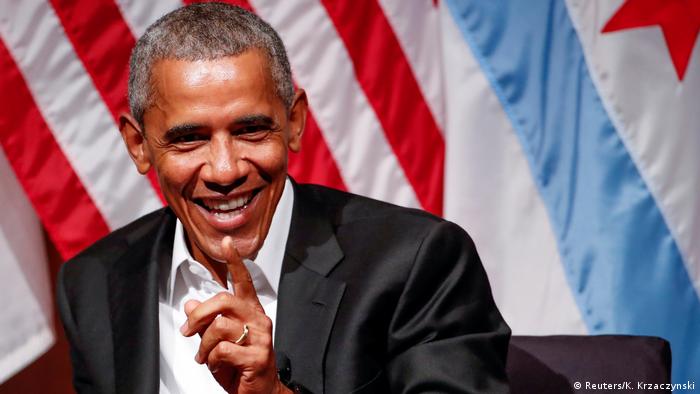 Obama to give speech in Berlin to mark Reformation anniversary

Germany's protestant church has secured a coup: Barack Obama will address the annual assembly to mark the 500th anniversary of the Reformation.

Former US President Barack Obama has criticized the travel ban policy of his successor, Donald Trump. It comes as Washington's attorney general filed a lawsuit against the executive order, labeling it unconstitutional. (30.01.2017)

Outgoing US President Barack Obama has phoned the German chancellor to thank her for her steady leadership. He said it was "fitting" that his final call to a foreign leader should be to her. (19.01.2017)

Former US President Barack Obama on Monday urged young people to get involved in politics at his first public address since President Donald Trump took office three months ago.

Without making mention of Trump, he told a University of Chicago audience that he would use his post-presidency time to encourage young people to engage with their communities.

"I'm spending a lot of time thinking about: what is the most important thing I can do for my next job?" Obama said at the university, where he once taught law.

"The single most important thing I can do is to help in any way prepare the next generation of leadership to take up the baton and to take their own crack at changing the world," he said.

Students did not ask him about Trump and he took no questions from reporters.

He said he had worked hard to bridge a deep political divide in the country. "It's harder and harder to find common ground because of the money in politics," Obama said.

"Special interests dominate the debates in Washington in ways that don't match up with what the broad majority of Americans feel."

After three months off, Obama was greeted with a standing ovation.  He said he was "incredibly optimistic" about the future.

The former president told students about his experiences as a community organizer in Chicago and how that led to his political career. He gave advice on leadership, dealing with failure and even social media.

He told the audience that young people were the key to solving the nation's most daunting problems.

He delivered brief remarks at the event before asking students on the panel about what influenced them.

Obama has largely stayed out of the spotlight since leaving office, despite frequent attacks from the Trump administration over his legacy.

#ObamaFarewell: Saying goodbye to the 44th US president

#ObamaFarewell: Saying goodbye to the 44th US president