US President Barack Obama has invited German Chancellor Angela Merkel to visit Washington, apparently to repair ties strained by US surveillance of her mobile phone. An exact date has not been announced. 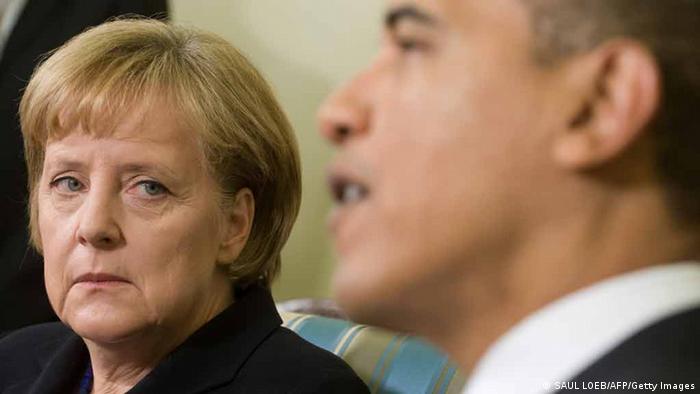 Chancellor Merkel's spokesman said she had accepted an invitation from President Obama to visit Washington as he was briefed on Wednesday by privacy advocates on ways to reform US surveillance operations.

White House spokesman Jay Carney declined to elaborate on whether the issue of eavesdropping had been discussed when Obama phoned Merkel on Wednesday.

"I believe the president made the call because of her injury," Carney said, adding that he had wished her well following her Christmas period skiing accident that fractured her pelvis.

Obama had also congratulated Merkel on the "formation of her new cabinet," Carney added, referring to the inauguration in late December of Merkel's third-term grand coalition government.

The two leaders' future talks would include a "full agenda" for 2014, including a proposed transatlantic trade pact and an upcoming NATO summit, he said.

Last year, Merkel (pictured with Obama) reacted furiously to revelations that the US National Security Agency (NSA) had listened to her mobile, warning Obama in October that this would amount to a "breach of trust."

Washingtonnever confirmed eavesdropping on several world leaders disclosed in media reports sourced to the US whistleblower Edward Snowden. The White House, however, did say the US would not monitor Merkel in the future.

Late on Wednesday, Merkel's spokesman in Berlin, Steffen Seifert, said she had accepted Obama's invitation for her to visit Washington, but like the White House did not offer a date.

At the White House on Wednesday, Obama was briefed by a review panel comprising privacy advocates and intelligence officials.

The Privacy and Civil Liberties Oversight Board said it would issue its own report on the NSA mass surveillance of telephone records by next month.

On Thursday, Obama is due to discuss intelligence activities with members of Congress, according to Carney.

Disclosures made by Snowden via media outlets since June 2013 about the NSA's mass collection of data provoked outrage worldwide.