US President Barack Obama has delivered a speech at Yangon University in Myanmar, the first address by an American president in the country. Obama called on Myanmar to push on with its democratic reforms. 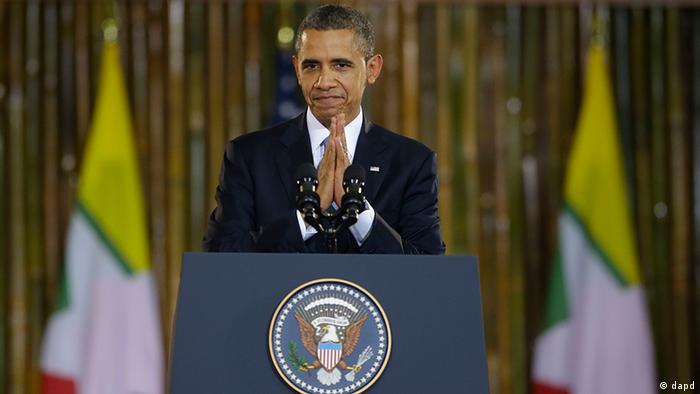 The audience for Obama's speech on Monday included many former political prisoners of the former military junta in Myanmar, which is also known as Burma.

Among them was Aung San Suu Kyi, whose release and eventual election to parliament have been two of the biggest signs of democratic change in Myanmar in the last two years.

Obama said the people of Myanmar have the opportunity to show the world "the power of a new beginning" and encouraged the democratic reforms to continue.

"Reforms launched from the top of society must meet the aspirations of citizens who form its foundation," Obama said. "The flickers of progress that we have seen must not be extinguished"

The challenge for Obama during the trip has been maintaining a balance of praise and support for Myanmar's reforms without ignoring the fact that there are still deep divisions in the country. In addition to continued detention of political prisoners, sectarian unrest in the western state of Rakhine, which has left over 160 people dead in clashes between Muslims and Rakhine Buddhists since June, is a sore spot in the country.

"For too long, the people of this state, including ethnic Rakhine, have faced crushing poverty and persecution," said Obama. "But there's no excuse for violence against innocent people, and the Rohingya hold within themselves the same dignity as you do, and I do."

Myanmar has come under pressure to give citizenship to stateless Rohingya Muslims.

Suu Kyi warned against being "lured by a mirage of success."

"The most difficult time in any transition is when we think that success is in sight," she said after meeting with Obama at her Yangon home.

Obama, who also met with President Thein Sein earlier in the day, pledged America's help as Myanmar builds its society and said the US would be friends with any nation that "respects its people's rights and international law."

Obama continued on to Cambodia after departing Myanmar.