US President Barack Obama's plan to cut carbon emissions from US power plants has been hailed as visionary by the UN, EU and environmental groups. Republicans have vowed to do whatever it takes to halt the measures. 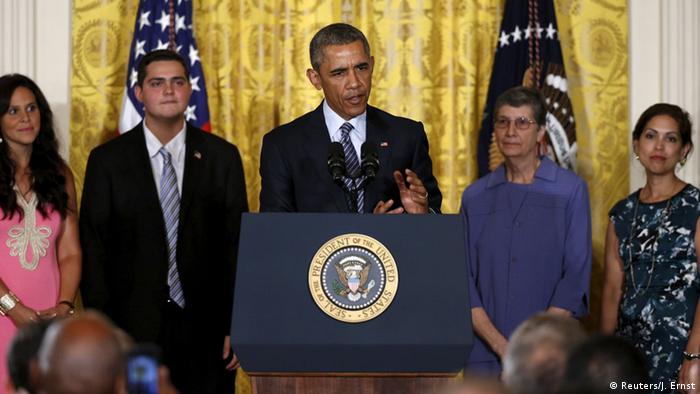 The regulations were also welcomed by environmental groups including the World Wildlife Fund for Nature and the Center for Climate and Energy Solutions. Sam Adams of the World Resources Institute said the policy would "drive technological innovation."

Obama is putting the plan in place by executive order, bypassing the Republican-controlled Congress, where the measures have been described as "government overreach" and "heavy-handed." A number of Republicans and lobby groups have raised concerns about the possible impact the measures could have on the US economy. Some of the plan's opponents have threatened to sue the government over the new rules.

Senate Majority Leader Mitch McConnell, a Republican senator from coal-rich Kentucky, said the regulations would fail to meaningfully affect the global climate and would drive up electricity costs.

"They could actually end up harming the environment by outsourcing energy production to countries with poor environmental records like India and China," he said. "I will do everything I can to stop it."

West Virginia Attorney General Patrick Morrisey said his state would be among the group "launching an aggressive legal campaign."

The American Coalition for Clean Coal Electricity, an industry lobby group, also implied legal action, saying Obama's administration was "pursuing an illegal plan that will drive up electricity costs and put people out of work."

Wisconsin Gov. Scott Walker, a Republican candidate for president, said the regulations would be an economic "buzz saw" that would "cost hard-working Americans jobs and raise their energy rates."

"The real challenge is how do we grow and prosper in order to foster more game-changing innovations and give us the resources we need to solve problems like this one," Bush said.

The road to COP21

Obama has accused his critics of scaremongering and argued that bleak predictions of higher electricity costs, power shortages and a damaged economy aren't accurate.

"In 1990, when Republican President George H. W. Bush decided to do something about acid rains, [they] said electricity bills would go up, lights would go off. It didn't happen," Obama said.

The plan aims to boost the US position at UN climate talks (COP21) in Paris later this year, where world leaders will be hoping to reach an agreement on measures to limit global temperature increases to 2 degrees Celsius (3.6 degrees Fahrenheit).

The EU's commissioner for climate action and energy, Miguel Arias Canete, said via Twitter that Obama's plan provided "further momentum to COP21" and showed the "US commitment to underpin its international climate pledge with domestic action."

Member states of the European Union, which is the world's third largest carbon emitter, have already agreed to cut emissions by 40 percent from 1990 levels by the year 2030.

President Obama's new climate change rules are no panacea to global warming and won't turn the US into a green economy overnight. Still, their importance, both domestically and internationally, can't be overestimated. (03.08.2015)